Keys Voters Have Their Say On GMO Mosquitoes

An argument that has been taking place in Mosquito Control board meetings, hotel conference rooms and Facebook comment strings finally moved to the ballot box on Tuesday.

With most of the vote in (32 of 33 precincts) the GMO mosquito question had split results.

The vote was nonbinding. The actual decision is still up to the Florida Keys Mosquito Control Board — which itself had three of its five seats up for election on Tuesday. One commissioner, Jill Cranney-Gage, regained her seat on the board while another incumbent, Stephen Smith, was ousted after 20 years. 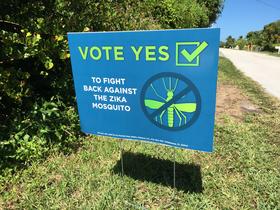 Oxitec began its efforts to test its genetically modified Aedes aegypti mosquitoes in the U.S. in 2009. That's when a dengue fever outbreak in Key West brought the company's technology to the attention of the Keys mosquito district.

Aedes aegypti is an invasive exotic mosquito that carries dengue fever, as well as chikungunya — and Zika.

Over the summer, the Zika outbreak in South Florida brought added pressure for new ways to combat the mosquito. And the FDA issued a finding of "no significant impact" for the trial, clearing the way for it to proceed.

But local opposition and pressure on the Mosquito Control Board led for the board to call for the referendum, even though its results are nonbinding.

Nimmo was in the Keys Tuesday for the vote.

"The FDA the CDC and the EPA all regulate in this trial and they have done a lot of studies and information based around the environmental assessment to show that there is no significant impact on human health. animal health or the environment," he said.

Opponents of the GMO trial said they had mixed reactions.

"We're happy on one side and we're a little disappointed on the other," said Barry Wray of the Florida Keys Environmental Coalition.

Opponents of the trial said they will not give up, even if the trial is moved to a different part of the island chain where voters said they approved.

"I'm very happy for the people on Key Haven because they exercised their right not to be used as a guinea pig," said Mila deMier, an organizer of the opposition to the test.

Nimmo said Oxitec would move the trial to a different area of the Keys if that's the Mosquito Control Board's wish.

"Yes, of course, if they decide that that's the best of course of action then we'll follow that," he said.

While Key West experienced the dengue fever outbreak in 2009-2010, the Keys have been relatively unscathed by the Zika virus compared to other parts of South Florida. Monroe County has reported six cases of Zika so far, all travel-related, compared to more than 250 in neighboring Miami-Dade — which also has local transmission occurring.

Now the GMO mosquito quesiton is back in the court of the Florida Keys Mosquito Control board — which will have two new members. Longtime member Steve Smith was ousted by Brandon Pinder. Stan Zuba defeated Janet Wood for an open seat on the board. Kathryn Watkins, who said she ran because of her opposition to the GMO trial, failed in her challenge to Jill Cranney-Gage.

Officials from Miami-Dade as well as Pinellas counties have publicly stated they are interested in pursuing the GMO technology. Nimmo said the company has been communicating all along with other areas in Florida, Texas and elsewhere where mosquito control is an issue.

"Yes, they're very interested and of course we are going to continue talking to them. If it doesn't go ahead in Key West, then obviously there are other places that are interested in this," he said.

The studies on human health and the environment would not have to start from scratch to seek federal approval for a trial in a new site, Nimmo said, though the particulars of the proposed site would require review.

A survey of households in Key Haven, the neighborhood proposed for the first U.S. trial of genetically modified mosquitoes, found a majority of respondents opposed to the test.

Researchers from the Bloomberg School of Public Health at Johns Hopkins University in Baltimore sent surveys to every household in the neighborhood.

While the FDA has released a preliminary finding of no significant impact from a proposed test of genetically modified mosquitoes in the Florida Keys, many in the neighborhood where the test would take place are opposed to the plan.

Oxitec, the company that makes the genetically modified version of aedes aegypti, is holding two public meetings in Key West this week to answer questions from the public, especially those in Key Haven. That neighborhood, a peninsula about five miles from Key West, is the proposed testing site.

Florida Keys officials have delayed a referendum on releasing genetically modified mosquitoes to reduce the population of a disease-carrying species.

In the fight against mosquitoes in the Florida Keys, domestic inspector Carrie Atwood has a few indispensable tools. She carries a dipper — essentially, a plastic cup at the end of a stick. She has a flashlight for looking into the backs of plants and pots. And she has a turkey baster.

"That's good for getting into bromeliads, which is a plant that holds water at the base of the leaf," Atwood said. "We use that to dip in there or just any other kind of tight space where the dipper won't go."