As the rainy season returns to South Florida and the fight against Zika gears up, the Florida Keys Mosquito Control District Tuesday began a first-in-Florida trial of a control method that uses bacteria to reduce mosquito populations.

The district will release 20,000 male mosquitoes infected with the Wolbachia bacteria twice a week for the next 12 weeks. The releases will take place in a 10-acre test site on Stock Island,  and mosquito traps there will be compared with a similar-sized control area nearby (but separated by a buffer). 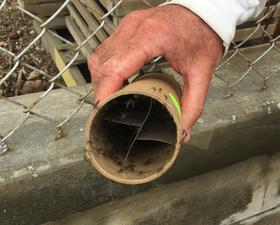 When a male Aedes aegypti mosquito infected with Wolbachia mates with a wild female, there are no offspring.

"Aedes aegypti is the cause of a number of different diseases," said Andrea Leal, director of the Keys district. The Keys had a dengue fever outbreak in 2009 and 2010 and one locally acquired case of dengue last year. The Keys had several travel-related cases of Zika last year, but no reports of locally transmitted cases.

"The mosquito itself is difficult to control with normal control techniques, so we're constantly looking for new technology that can assist us in getting these mosquitoes better under control," Leal said.

The Keys has an aggressive mosquito control program compared to many other areas of Florida, with frequent aerial spraying of larvicide and house-to-house inspections for standing water.

The Keys district has also agreed to work with Oxitec, a company that has developed a genetically modified Aedes aegypti that produces nonviable offspring. That test was approved by the FDA for Key Haven, but residents there voted against the test in a nonbinding referendum last November.

The Keys as a whole voted in favor of the Oxitec trial, and Oxitec has resubmitted its application to the FDA to cover the entire Keys. If that is approved, a new trial site for GMO mosquitoes will be selected.

The Wolbachia trial has not garnered public opposition like GMOs and many of the opponents of GMO mosquitoes support the bacterial method.

Health officials have published the first comprehensive view of Zika-linked birth defects occurring in the U.S.

The study is the largest so far to estimate the risk of severe birth defects from Zika infections in pregnant women, researchers report Wednesday in the Morbidity and Mortality Weekly Report,

Officials say no disease-carrying mosquitoes have been found so far this year in the Miami area.

U.S. health officials have begun enrolling volunteers for critical next-stage testing of an experimental vaccine to protect against Zika, the mosquito-borne virus that can cause devastating birth defects in pregnant women.