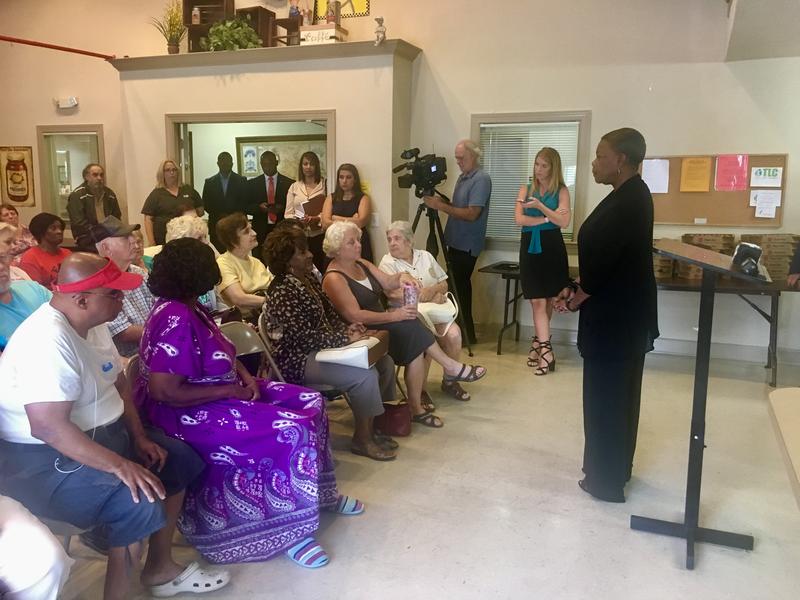 The closing of a Winn-Dixie has State Senator Audrey Gibson, D-Jacksonville, scrambling to help find transportation for senior citizens who rely on the grocery store.

Madison Manor Senior Living, on Hogan Road near Beach Boulevard, is about a block from Winn-Dixie and 70 percent of the 255 residents don’t have vehicles. Now that the store is closing, they’ll have to figure out where to get their groceries.

Russ Holgerson has lived in the complex for seven years and, like most of his neighbors, he doesn’t have a car. He said the problem with the city bus is, even though seniors ride for free, it drops people off on the opposite side of the eight lane Beach Boulevard.

“You start walking, you get half way, (the signal) changes and the cars start going,” he said. “You got to stand in the middle of the road and they don’t slow down for nothing.”

“I’m solution-oriented, solution-driven,” Gibson said. “We’re going to get to every solution possible for the residents here and other people in the area who need transportation.”

The room was packed with people, many using walkers or wheelchairs.

“Our takeaway is let’s see what our service looks like here,” said JTA VP of Planning and Development Brad Thoburn after the meeting. “What are things that they have access to that they may not be accessing and see how we can help them?”

He said JTA can look into changing bus routes if they make sense. A bus stop right in front of the complex averaged just two riders a day, so it was cut.

Gibson said she’s hoping JTA will consider dropping people off on the other side of Beach Boulevard now that the store is closing. She said she’ll also be contacting city officials about the time people are given to cross the road.

JTA offers a paratransit ride service for disabled people. It requires approval from JTA after an in-person interview and a form completed by the rider’s physician. Residents at the meeting said even if they’re approved, it’s too expensive to use for the two mile drive to Wal-Mart at a flat rate of $3 each way.

“We’ve got people here who can’t walk that far,” Holgerson said. “We need something to where they can get there without being charged six bucks.”

Residents living at Madison Manor all make under $28,000 a year.

While Thoburn said JTA wasn’t considering any paratransit fare changes, he’d like to survey residents in the area to better understand their needs. Residents said they hope a different grocery store replaces the closing Winn-Dixie.

LISTEN | This story is featured on Redux

A grocery co-op is coming to the Northwest side of Jacksonville, in an area known as a food desert. The project is the work of nonprofits that are stepping in where grocery chains don’t want to open.

U.S. Department of Agriculture Deputy Under Secretary Ann Bartuska was led through a maze of raised garden beds on a lot nestled in the middle of a Westside neighborhood Tuesday.

Listen to this story on Redux

As part of Michelle Obama's healthy eating initiative, a group of major food retailers promised in 2011 to open or expand 1,500 grocery or convenience stores in and around neighborhoods with no supermarkets by 2016. By their own count, they're far short.