Insuring Health in the Sunshine Economy

Florida leads the nation again for the number of people signing up for individual health insurance -- Obamacare.  Over the first five weeks of open enrollment this fall, 600,000 Floridians signed up. That's about half the total number of people expected to sign up once all of the enrollment periods expire.

WLRN's Sunshine Economy spoke with Pat Geraghty, CEO of Florida Blue and it's parent company GuideWell. Here are the top five things we learned about it's Obamacare business:

"We've heard from United Healthcare that they're thinking about exiting the marketplace. We've heard that CIGNA is considering the same strategy. We are staying the course at Florida Blue and we are actively involved statewide in all 67 counties [in Florida]."

"I think there's two things at work here. One is that our competitors, for the most part, are publicly traded companies. They have to solve Wall Street. They have to produce returns that satisfy their investors. We're a not-for-profit mutual insurance company. That means that we don't have to solve for Wall Street. We set our prices to produce a return that's in the 2 to 3 percent range. Another distinct difference is we're the largest player with a population in the Affordable Care Act enrollment that's now well over 400,000 people. We have a mix of risk in our population."

On What ACA Insurance Plans People are Enrolling In:

"There's no question about it whether it's existing or new customers it's extraordinarily price sensitive."

"We can tell from the inquiries that people are interested in keeping their cost in line. The idea that some people will shift to lower benefit plans to help that cost is highly probable that they'll shift to plans that have tighter [health-care provider] networks as opposed to wide open networks." 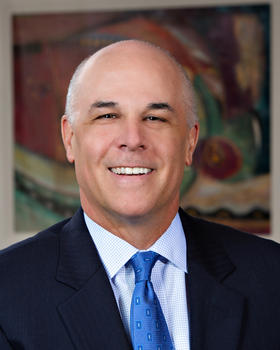 On the Number of Florida Blue ACA Plans:

"When we first started the first year, we weren't quite sure what to expect.  We had hundreds and hundreds of plan offerings. What we found was that was too confusing to the consumer. When you say people want choice but if you give them unlimited choice people glaze over and say, 'Well, I don't know what to do.' We we narrowed significantly from all of the choices that we had out there to a more standardized group of offerings."

"If we're going to be scrutinized and held accountable for the price of the premium [it)]makes sense for us to have a bigger stake on the other side of the equation."

"We have no interest in owning hospitals. I think people ought to do what they do. I think you draw some lines about where you might blur that."

On the ACA's Impact on Company-Provided Health Insurance:

[The medium and large employer-based insurance market] "has not really been affected significantly by the ACA. Everybody gets some impact,  but substantially that market has held together pretty solid."

"I think the larger market has been creative about their plan design I think they've been effective in rolling out wellness and prevention programs. I think there's a lot of the education that happens from the employer to the employees. I think lots of larger employers have made their workplaces healthier. You see walk-at-work programs. You see healthier selections in their cafeterias. You see people that are a conscious of their vending machines. You see a variety of things happening in that large employer marketplace to stem the tide of being  open to all of the [cost] drivers that have previously existed."

The latest numbers from federal health officials show Florida is continuing to lead in enrollment on HealthCare.gov, with nearly 600,000 who have signed up so far.

Florida Blue is introducing hybrid plans into Florida’s Affordable Care Act marketplace. They  could give consumers both more and fewer choices in providers.