Not all bills will make it through the annual legislative session, And this year, the impending failure of several high-profile measures is raising eyebrows. 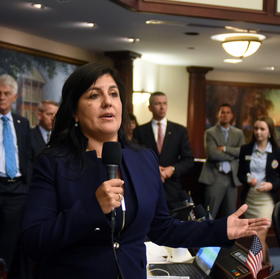 In an impromptu meeting of women lawmakers Thursday, Rep. Jackie Toledo, R-Tampa, blasted the Senate for failing to take up measures on ethics and human trafficking.

“We’ve given the senate ample time to act on issues that are important to women," she said during a women's caucus meeting. "You’ve given me feedback on what’s important to us and they failed us. They have not heard us and we’re not going to give up. We will not be silent and we will fight back because these issues are important to all of us.”

At the start of the 2018 legislative session and still in the throes of several sex scandals the legislature vowed to crack down on sexual harassment.  Senate Rules Chairwoman Lizbeth Benacquisto signed on. Earlier in the week she admitted the fate of the bill looked bleak.

“The desire of myself, Senator Book and many folks in leadership and beyond are focused on that as well, we’ve been hyper focused on making sure we do all we can for the communities that have been affected.”

Benacquisto pointed the finger to the mass shooting at a Parkland Florida high school, and the legislature’s scramble to pass legislation in response to it, leaving little time for other priorities.  Senate President Joe Negron said it didn't mean his chamber wasn’t taking sexual harassment seriously, and he pointed to changes made in the chamber's rules.

All the sex scandals involved Senators—Democrat Jeff Clemens resigned over an affair with a lobbyist. And Republican Jack Latvala, once considered a force in the legislature, he stepped down after investigations revealed he sexually harassed a Senate aide and tried to trade sex for favors with female lobbyists. Two sitting senators, Anitere Flores and Oscar Braynon, admitted to an affair.

Still mired in legislative quicksand is a bill by Democratic Senator Lauren Book that would have allowed victims of human trafficking to sue hotels and businesses that turn a blind eye to their plight. Book mysteriously pulled her proposal from its last committee hearing, and has remained mum about why, while defending herself against critics.

“If my record and the things I’ve done in the space of protecting victims of sexual assault wasn’t so long and personal to me, it’s laughable. So some of the ire I’ve received from some individuals is misplaced," she said when asked why she pulled the bill from the Senate Rules Committee.

There also remains worry about a proposal to make texting while driving a primary offense. In the end, the women's caucus decided to sign on to an ask for one specific measure—texting while driving—to get a floor hearing. That one is sponsored by Democratic Representative Emily Slosberg, whose twin sister Dori, died as a result of a distracted driver.

Momentum has stalled for a bill that would have allowed human trafficking victims to sue hotels that do not take action and train employees to prevent such atrocities. The measure’s sponsor isn’t saying why she pulled the plan.

January is Human Trafficking Awareness Month. In Florida – which has the third-highest number of trafficking reports of any state – the response includes training for health care professionals, who often encounter victims in their work but miss the signs.

The month of January is dedicated to raising awareness of human trafficking. But, the Florida House and the Senate want to make awareness a year round effort.

As part of Human Trafficking Awareness Month, law enforcement officials and other stakeholders are coming together to make sure Floridians know what to look for to help combat the modern day slavery practice.