How Safe Is The Zika-Fighting Pesticide Sprayed Over Wynwood? 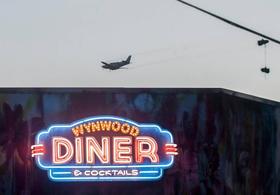 Puerto Ricans took to the streets to keep it off their island.

But a controversial pesticide is being aerial-sprayed over a Miami-Dade Zika hot zone in a race to kill the virus-carrying aedes aegypti mosquito. And its use is raising concerns about possible health risks posed by long-term exposure to the chemical.

Listen
Listening...
/
WLRN's Christine DiMattei talks with Miami Herald reporter Andres Viglucci about the use of a controversial pesticide in Miami-Dade.

According to the U.S. Environmental Protection Agency, Naled is in a class of pesticides known as organophosphates. The EPA has banned some chemicals in the class due to their highly neurotoxic nature.

The Centers for Disease Control and Prevention say Naled has been widely used since 1959 to control mosquito populations in the United States. Naled is currently being applied by aerial spraying to about 16 million acres within the mainland United States as part of routine mosquito control. It’s also been used to control mosquito populations after natural disasters like hurricanes and floods.

Why did Miami-Dade Mosquito Control decide to use Naled in Wynwood?

According to a recent Miami Herald report, the ground-spraying of a different pesticides known as pyrethoids – mostly through backpacks and trucks – wasn’t working fast enough to kill the aedes aegypti mosquitoes breeding in Wynwood.  These Zika-carrying mosquitoes are especially difficult to target as they can breed in tiny amounts of water that can be hard to spot in an urban setting. Additionally, they might also have acquired a resistance to the pyrethoids.

How is Naled being applied in Miami-Dade.?

By aerial spraying from planes. Minute amounts of the pesticide are diffused within a mist and – according to Mosquito Control – it kills mosquitoes on contact.

According to the EPA, the concentrations of Naled used in aerial spraying aren't high enough to harm people.

But a spokeswoman for Beyond Pesticides, a Washington, D.C. organization that works to identify problem pesticides, calls widespread application of Naled “troubling” and says studies have shown that low-dose exposures are problematic over the life of a person.

At large doses, Naled’s effects on people have ranged from headaches, nausea and diarrhea to death. Several accidental deaths in India have been blamed on Naled.

Does use of Naled harm wildife and the environment?

Some studies suggest that Naled and other pesticides have contributed to a steep decline of butterfly populations in South Florida. The Florida Department of Agriculture has confirmed that the chemical is toxic to honeybees and studies have shown risks to some species of fish and aquatic invertebrates like shrimp.

Are there any less toxic alternatives to Naled?

Yes. Miami-Dade’s Mosquito Control is also employing the use of larvacides, which kill aedes aegypti at the larval stage.The spraying of that chemical in Wynwood is being done alternately with Naled.

If I’m outdoors while aerial spraying is going on above my neighborhood, will I get sick?

Not likely, unless you have a strong sensitivity to chemicals. But the CDC urges anyone concerned about Naled exposure to stay indoors during the spraying.

Some pesticide being used to kill mosquitoes and fight the spread of Zika in Miami-Dade County is also harmful to honey bees, birds, some fish and people, according to the Miami Herald.

The insecticide naled has been approved for use in the United States since 1959 but is banned by the European Union, the newspaper reports.

State health officials said Wednesday they have found three more Zika cases believed to have been caused by mosquito bites in Miami-Dade County, bringing to 33 the number of locally transmitted cases in South Florida.

There is only one confirmed case of travel-related Zika in Sarasota County, but that didn’t stop a large crowd of people from bringing their concerns to a forum about the virus.

Pregnant And Reporting On Zika In Miami

There's only one place in the continental U.S. where mosquitoes are known to be transmitting the Zika virus: Miami's Wynwood neighborhood. Pregnant women are arming themselves against mosquitoes.

Zika Travel Cases Continue Showing Up Across The State

Two new locally transmitted Zika cases were reported Monday in Miami-Dade County, as the number of travel-related cases continues to mushroom across the state. The two local Miami-Dade cases brought to 30 the number of infections believed to have been caused by mosquito bites in South Florida.

Health officials say a Texas resident who recently traveled to an area of Miami where local Zika transmission occurred has tested positive for the virus.