How 'The Condom Lady' Teaches Local Seniors About Safe Sex 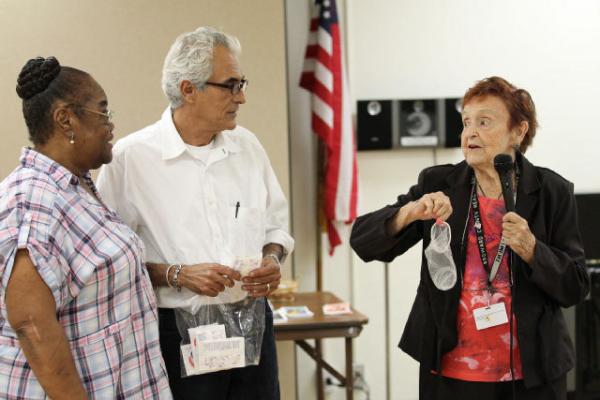 Kate GeMeiner, in a pixie haircut and a sensible brown pantsuit, holds up what, from the back of the room, appears to be a see-through balloon. It isn’t.

“Never use Vaseline with a condom,” she says in her best announcer’s voice. “Never, only KY jelly.”

The audience sits in rapt silence.

“And before you use a condom, check it for the expiration date.”

In a corner, a couple of women titter.

Then, when she shows off a flavored condom, GeMeiner, 83, former hospice chaplain, PTA president, furniture rental saleswoman and great-grandmother of two, delivers what may be the unintentionally funniest line of her presentation.

“The flavored ones,” she deadpans, “are for oral sex.”

The women and the smattering of men in this Hallandale Beach senior center erupt in hoots and laughter. Some hold tight to their walkers, others to their canes. One adjusts his hearing aid.

Count on GeMeiner, aka The Condom Lady or Dr. Truth, to tell it like it is. Doesn’t matter that members of her audience are long retired, ailing from myriad chronic medical conditions and considered to be impervious to certain natural urges.

But in the age of Viagra, Grandma and Grandpa are getting it on — and GeMeiner wants to make sure they’re practicing safe sex. She has been preaching her version of the gospel to this unlikely audience for about two decades, taking her show, complete with foil-wrapped condoms, to senior centers, nursing homes, assisted living facilities, health fairs, anywhere, really, that will have her.

“The average senior was raised at a time when you didn’t talk about sex,” GeMeiner says “It’s hard to overcome their embarrassment, but the fact is that there’s no age for getting an STD,” or sexually transmitted disease.

One way she navigates her audience's discomfort is by telling jokes and weaving a good yarn. Another tactic: "I tell them, 'You may think this topic is not applicable to you, but you may know a neighbor or friend who can use it."

At the end of each talk she urges seniors to take home free condoms. "When you write a letter or send a check to your grandchildren, send them a condom."

GeMeiner, who lives with one of her four children in Davie, knows the message may seem odd in a place where Social Security and Medicare are preferred topics. But it’s precisely for this reason, and the occasional obtuseness of her peers, that she forges on.

“One time after a talk, a man came up to me and told me he didn’t see the point of using a condom because his girlfriend was too old to get pregnant,” she recounts, shaking her head. “I said, ‘Excuse me while I go hit my head against the wall.’”