Open enrollment is underway for health insurance through the Affordable Care Act exchanges.

This is the fourth year that insurance will be available through the Affordable Care Act exchanges. Cory Brown is the Benefits Program Manager for 90 Works and a health insurance navigator. She says if you bought insurance through the exchange before you need to go through the process again. "Everyone does need to apply every year. If [customers] are happy with the plan they have and that plan is on the web site where they can choose it they can keep it. But it's always good to review the plans because there are some plans that have dropped off [while] some more have come in."

Let’s get some numbers out of the way right up front, when we talk about people who buy health insurance in the so called Obamacare marketplaces we’re not talking about a lot of people. True 12.7 million is a pretty big number, but it’s only a little more than four percent of the total U.S. population. 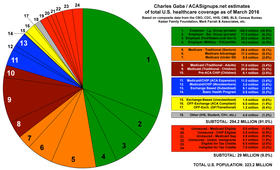 The majority of Americans, 84 percent of the population, get their health insurance from their employer or the government through Medicare or Medicaid. For the people who do have to buy from the exchanges, the majority get some help paying for their plans. "83 percent of the enrollees received financial help to make their coverage more affordable."

Brown says a family of four in Escambia County making $60,000 a year qualify for a tax credit of nearly $700  a month. (Thanks to ACA Signups.net for the cool graph)

Those tax credits are important. There have been reports of price increases averaging around 22 percent across the country. Brown says the prices increases are offset by an increase in the tax credits so families usually pay close to the same amount out of pocket. There have also been reports of insurance companies dropping out of the exchanges. Brown says there is still plenty of competition in the counties she serves in northern Florida. "[Locally] there were 86 plans [available] last year, this year is probably close to the same." She says that while some companies have dropped out, others have joined the exchange.

Under the Affordable Care Act, everyone in the US is required to have health insurance or pay a penalty. For tax year 2016, the penalty will rise to two point five percent of your total household adjusted gross income, or $695 per adult and $347.50 per child, to a maximum of $2,085. Open enrollment will run through January 31, 2017. You can go to healthcare.gov and sign up, or contact one of the navigators if you think you’ll need some help. For information on that go to 90Works.org, call 855-909-6757 extension 5 or email Cory Brown at cbrown@90works.org.

Open enrollment in the Affordable Care Act Marketplaces begins Tuesday and the state says the average premium increase in Florida is 19 percent.

But the news is not be as bad as it sounds for most consumers.

Until this week, when big increases in insurance premiums were unveiled for next year, the federal health law has not been a major issue in the presidential election. In fact, fixing what ails the Affordable Care Act isn’t even among voters’ top priorities for health issues for next year, according to a new poll.

The federal government is playing down the 25 percent average rate hike slated to go into effect under the Affordable Care Act, or ObamaCare.

Premiums will go up sharply next year under President Barack Obama's health care law, and many consumers will be down to just one insurer, the administration confirmed Monday. That's sure to stoke another "Obamacare" controversy days before a presidential election.