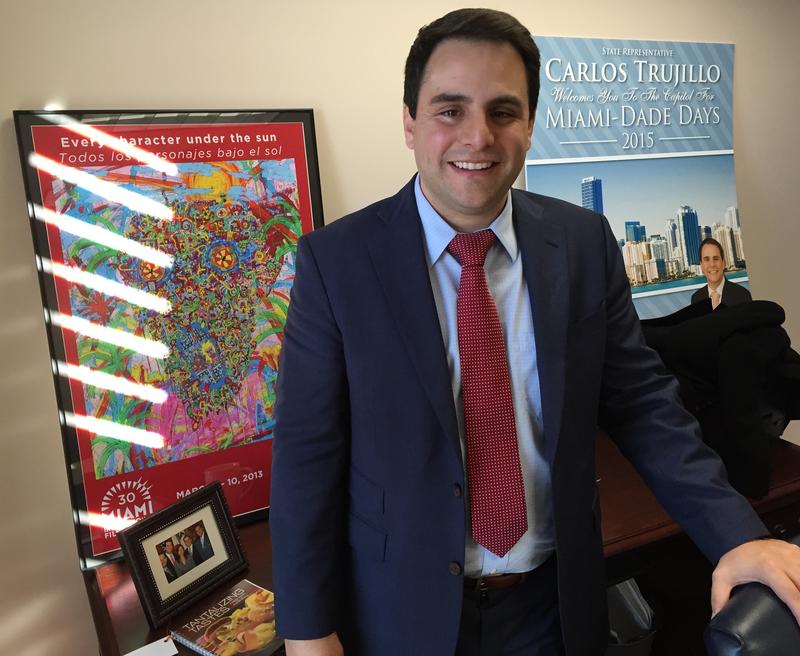 Florida State Rep. Carlos Trujillo is in the middle of some pressing and controversial issues this legislative session.

The South Florida Republican sponsored one bill that would close a health insurance gap and another that would make it illegal for people who have been deported to come back into Florida.

And before session even started, he took heat from the gun lobby for his position on a Stand Your Ground bill.

Trujillo sat down in his Tallahassee office on the first day of session to talk about his expectations this year and what that means for Floridians:

Q: What are your legislative priorities for the session?

A: The main legislative priority that I’m working on is the Balance Billing Bill.

Q: This is what happens when somebody goes in for something and say the hospital is in network, the doctor’s in network, but then they wake up and find out that the anesthesiologist was out of network or somebody who had to come in for a consult was out-of-network. It’s also called surprise billing. Why is stopping that important to you?

A: Well, it’s one of the number one drivers of bankruptcy. A lot of people contacted our office and just across the state you have someone who happens to be traveling to Orlando with a family, they have a car accident, they end up in an emergency room. They’re hit with a $40- $50- $60- $70,000 medical bill.

In their minds they have insurance that should take care of the problem. Unfortunately they’re a member of a PPO [preferred provider organization], they’re balance-billed and, if they don't have the money or don’t enter into a payment plan, it'll drive them into consumer bankruptcy.

Q: Do you have an idea of how many Floridians are affected by this or could potentially fall into this category?

A: A third of all insured Floridians are in a PPO. … So roughly three to four million people fall into this category.

And the worst part is that a lot of them don't even know that. They think they have insurance and they have these emergency room situations. Or even if they go to their standard inpatient facility, they’re balance-billed or surprise-billed by some of the providers.

They think insurance pays for that. They will find out at some point — either through a collection agency or some creditor calling them — that it is not covered by insurance, and they’re responsible for those bills.

Q: Earlier today, a couple of busloads of people came and protested after the State of the State address about a bill that you have sponsored—an immigration bill. And they have characterized it as a bill that would criminalize parents who have been deported for coming back and trying to reunite with their families. What do you say to that?

A: I’m surprised by the outrage because we're not talking about individuals who are even here illegally. These are individuals who the United States of America spent — taxpayers ultimately have spent — thousands of dollars (or tens of thousands, or even hundreds of thousands of dollars) to give them all the due process afforded by our laws and by our country. Who we ultimately decide that for whatever reasons — whether it's criminal behavior, whether it's other reasons that may exist — they are forcefully removed from the United States of America, sent back to their country of origin. And they decide to just illegally reenter once again. And when they illegally reenter, they decide to commit a new crime.

It's currently illegal under federal law. What we're doing is just codifying that under state law.

Q: In November a bill that would have expanded the Stand Your Ground defense failed in the in the Justice Appropriations Subcommittee, which you chair. And the NRA accused you of betrayal for urging a couple of members of that committee to step out of the vote. What happened?

A: Just to be clear: what this bill would do is, for the first time in the history of Florida, [is] if a prosecutor, in good faith, brought a criminal case against an individual who later on asserts a Stand Your Ground defense, and the prosecutor was not successful in prosecuting the case, he would be individually responsible for $100,000 fine.

An individual could raise Stand Your Ground defense and not have to prove anything.

As to the NRA, they’re a special interest. And they advocate for their policies.

But as far as being pro-guns, I’m for open-carry. I own a concealed weapon. I own multiple firearms. But at some point as a law-abiding citizen, as a former prosecutor, and as a member of my community… Stand Your Ground is a great tool. It works well. It has historically worked well. There's nothing in that bill would give you any additional rights. What it would do, is some people who are unlawfully murdering individuals in our community, it’d give them affirmative defenses in which to be able to defend themselves with.

Florida's Path Toward A Balanced Budget Goes Through Healthcare

The only thing Florida lawmakers must get done during the legislative session is pass a balanced budget. But it’s tricky ironing out all the numbers. And  a big part of laying out a budget is determining how much to spend when it comes to healthcare.

A state official who wants to rescue insured patients from surprise health-care bills has crafted a road map for the Florida Legislature’s upcoming session.

Health care companies struggling to do business in Florida led the most talked-about news of 2015 here at Health News Florida.

Florida legislators have been grappling with the problem of balance billing—also known as “surprise billing”—and now the Center for Medicare and Medicaid Services has proposed a broader rule aimed at fixing the issue.