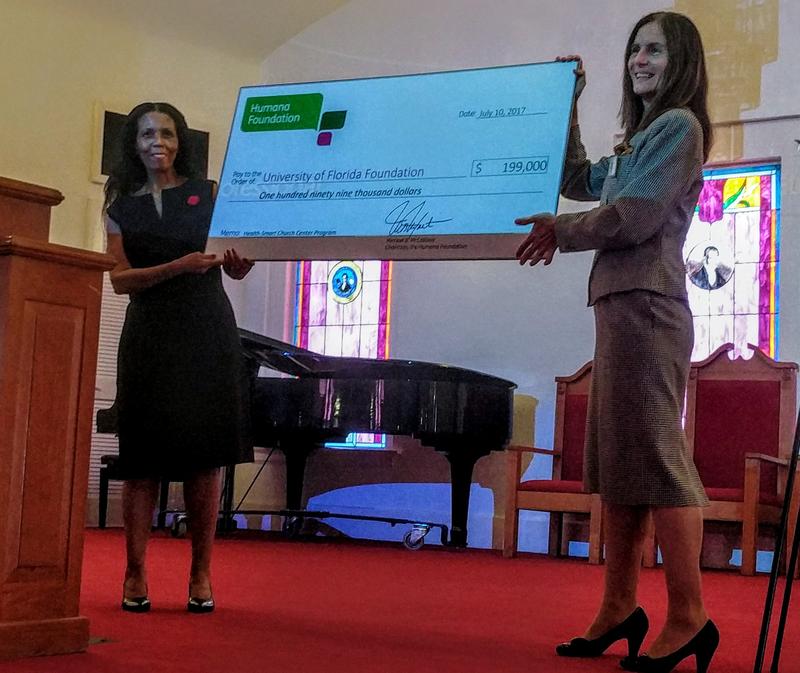 Four Jacksonville projects aimed at making residents healthier are getting a collective $444,000 boost from the Humana Foundation.

Deborah Galloway, president for Humana’s Central-North Florida region, said grant recipients needed to do more than identify a need — they must have plans to meet it.

One of the recipients, the Health-Smart Church Center program,  is focused on minimizing racial disparities.

At the Edward Waters College chapel Monday, a giant, foam check for just under $200,000 was presented to the center’s founder, Dr. Carolyn Tucker.

Tucker is also the director of UF Health’s health disparities research. She said the program will bring health tracking into churches.

“We know historically that black churches have been the hub for all education for black people. They’ve also had politics, health promotion — not just the spiritual part. That’s just one piece,” she said.

Health-Smart, which Tucker started as a pilot program in New York City, will deputize and train monitors to follow 30 congregants in each of six black churches around the New Town Success Zone neighborhood. For two months, overweight church members suffering from diabetes, high blood pressure and hypertension will also get special coaching to reduce their health risks.

Tucker said the Humana grant will go a long way to eventually expanding Health-Smart to entire congregations and make the program permanent.

“Having medical students, having interns and residents actually teaching people to prepare for health care visits to actually doing the weighing and taking people’s blood pressure and all of that”

In the pilot of the program Tucker did in the Bronx, she found black and Hispanic neighborhoods were most in need of health interventions.