It may seem counterintuitive – but a military medic or corpsman, trained to save lives in combat and provide health care at home, does not qualify for most civilian medical jobs.

What’s worse – many veterans are at a competitive disadvantage when seeking admittance into nursing colleges.

So in 2013, the federal government funded pilot programs at nine universities to create curriculums so veterans, medics and corpsmen can earn their Bachelor of Science in Nursing.

It’s called V-CARE - Creating Access to Registered Nurse Education for Veterans. And the University of South Florida was awarded one of the initial grants.

“There were over 11,000, in 2011, unemployed medics and corpsmen as they were leaving the service,” D’Aoust said. “At the same time, we’re facing a nursing shortage.”

D’Aoust, who is a nurse practitioner with a doctorate in teaching, took the lead creating USF’s medic to nurse program after a sentinel event.

“A dear mentor, colleague and friend - her son lost his life in service to this country as an Air Force pilot. His tact - who also happened to be a medic - the best position he can get was working as an EMT in a state that actually pays minimum wage. I thought what a travesty of justice,” D’Aoust said.

Medics and corpsmen have the skills to perform some medical procedures in the military that Registered Nurses and Nurse Practitioners do in civilian life. Yet, D’Aoust said many of them are at a disadvantage when competing for admission into nursing programs because their GPAs tended to be a little lower. 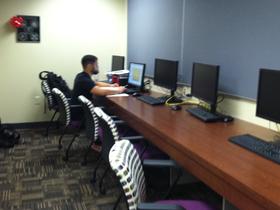 Three of the original nine V-CARE programs are in Florida. The other two are at Jacksonville University and Florida International University.

To design USF’s 16-month program, D’Aoust held focus groups with veterans, educators and “veteran friendly” universities. She even looked at similar programs that failed to avoid their mistakes. And she reached out to Janet Davis, a senior vice president and chief of nursing for Tampa General Hospital.

“The V-CARE program that USF started has been a great program. Number one they gave credit to the veterans for experience. That doesn’t happen often in nursing education programs,” Davis said. 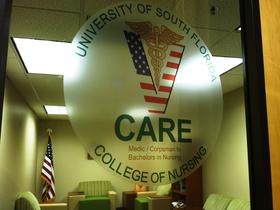 USF gives their veteran nursing students up to 16 credits for their military medical experience and they don’t have to take some of the introductory classes.

The V-CARE students also do their clinical training is at TGH which Davis said is a perfect match for the Level One hospital that handles trauma patients.

In fact, TGH hired one of the first 10 who graduated from USF’s V-CARE program in December.

Air Force Reserve medic and registered nurse, Willamina Folks, still had a bounce in her step as she exited TGH after finishing a 12-hour shift in the ICU, Intensive Care Unit.

“I’m just blessed with a job and something I really enjoy doing,” Folks said. “I get to help people.”

Folks liked that the program could be completed in just over a year, provided V-CARE students with supportive teachers and a military liaison, also called the sequence director, who was former military and talked their lingo.

“I’m grateful they came up with this program. I think military medics are going to benefit from it,” Folks said. “The military trains us well enough to be able to transition and do well in a BSN (Bachelor of Science in Nursing) program.” 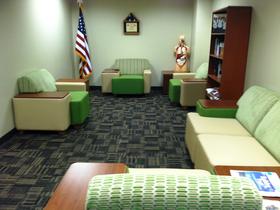 One of the many components contributing to the USF V-CARE program success at USF, said D’Aoust, is a small study lounge established specifically for the medics and corpsmen.

It’s furnished with lime green sofas and chairs, a bookcase, five computers and a separate study area with a whiteboard, microwave and refrigerator.

D’Aoust said the students are most proud of a quilt donated by the USO and an American Flag that flew over the Capital donated by U.S. Rep. Jeff Miller, chairman of the House Committee on Veterans Affairs.

She said it’s critical to provide a restful setting for the veterans’ some of whom may be recovering from combat injuries.

“These individuals have had their buddies die in their arms,” D’Aoust said choking up a little. “So, these individuals come into our program having seen some of the worst atrocities that humans can do to each other. They have that sense of honor, that dedication, the service. And they come into the nursing program and they’re just thrilled to have this chance.”

And taking a chance on the non-traditional nursing students is paying off. The first V-CARE class of 10 had a 100 percent graduation rate and the second class of 23 medics and corpsmen is on track to do the same this December.

USF also started a national webinar to share their V-CARE ideas and is consulting with other colleges who want to start a medic to nurse program.

A Miami Gardens-based college is challenging a decision by the Florida Board of Nursing that could shut down the school's nursing-education program. Azure College filed a legal challenge that was sent this week to the state Division of Administrative Hearings.

Women outnumber men in the nursing profession by more than 10 to 1. But men still earn more, a new study finds.

The report in this week’s Journal of the American Medical Association found that even after controlling for age, race, marital status and children in the home, males in nursing out-earned females by nearly $7,700 per year in outpatient settings and nearly $3,900 in hospitals.

Thirty five thousand nurses are injured every year lifting patients, and a Democratic lawmaker wants to do something about it.