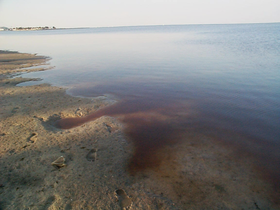 The Florida Fish and Wildlife Conservation Commission is partnering with red tide experts to combat the destructive algae ravaging the state’s Gulf coast.

Scientists from Mote Marine Laboratory, the University of South Florida and the Department of Environmental Protection are hoping to mitigate the effects of red tide stretching from Naples to the panhandle.

Researchers will experiment with a specialized clay that studies have shown could counteract the algae’s effects.

The state has given $13 million to South Florida communities crippled by red tide and toxic blue-green algae.

Beaches remain empty as officials clean millions of pounds of dead fish from the shores and tourism grinds to a standstill.

FWC is now reporting red tide in Northwest Florida. Blooms are off the coast of Santa Rosa and Gulf counties with moderate concentrations in Bay County.

The environment has been a contentious issue in this year’s elections. Governor Rick Scott, a candidate for Senate, has faced criticism over his policies and response to the crisis. Protestors gathered outside a campaign event in Naples this week shouting “Red Tide Rick.”