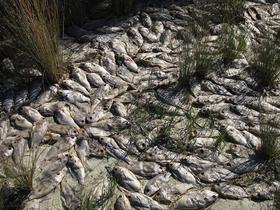 The Florida Fish and Wildlife Conservation Commission wants the public to report all fish kills this summer, when high temperatures and hurricanes threaten Florida’s marine and freshwater wildlife.

“A lot of rainy days in a row can have an impact on lakes and ponds. What happens is that you don’t have enough sunlight coming through because of the clouds, and the pond or the lake can just not create as much oxygen as is needed for the fish population to survive,” Brown says.

This summer, hurricanes are not the only threat to Florida’s marine and freshwater wildlife. Extreme heat can cause fish kills as well.  Brown says, “If the temperature of the water is too hot, the hot water does not hold as much oxygen in it, and that results in a fish kill as well.”

The FWC says most natural water bodies recover from fish kill events, but reports can help scientists better understand the causes of fish kills and diseases. For more information on where to report, go to the FWC website.

Despite a months-long season for red snapper in state waters off Florida and other Gulf states, fisherman across the Gulf of Mexico are gearing up to protest a brief three-day opening to catch the prized fish in federal Gulf waters. Fishermen argue a short opening hurts businesses and hampers anglers across the Gulf, but fishery managers say a small window is important to preserve a species still recovering from overfishing.

As Florida’s Bald Eagle population continues to increase, state wildlife officials are considering changes to the state’s management plan for the iconic raptors.

Accurate numbers are hard to come by, but state and federal wildlife officials are raising their official estimate of the number of endangered Florida Panthers.