Members of Congress Ted Deutch and Debbie Wasserman Schultz, both Democrats, moderated the roundtable at the Fort Lauderdale Chamber of Commerce.

Though she vowed not to place blame, Wasserman Schultz addressed key decisions that she said contributed to Florida’s current environmental crisis.

“We do know there are certain things that shouldn’t be happening,” Wasserman Schultz said. “For example, in 2012, Governor Scott signed a repeal of a 2010 law that required septic tank inspections every five years. There’s almost no regulation of septic tank runoff.”

Wasserman Schultz also pointed to cutbacks in water management budgets and the lack of enforcement of the Clean Water Act, which implemented wastewater standards.

The lack of oversight has led to excess amounts of nitrate and phosphorous runoff, she said. That fuels harmful algal blooms like Red Tide, which have affected coastlines across the state, including Palm Beach and Miami-Dade counties in South Florida.

According to Florida International University scientists, nutrient runoff pollution in Florida’s waters has created frequent blooms of other harmful algae besides Red Tide over the last 50 years. 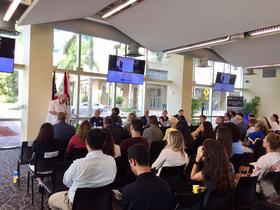 Assistant Professor of Marine Sciences at FIU, Jose Erin-Lopez, said algae blooms used to last three to four days, but due to nutrient pollution, recent episodes have lasted nearly a year. He fears this could lead to long-term health issues like bioamplification, the increasing concentration of a substance as it moves up the food chain.

“In a single oyster you have a certain amount of toxin,” Lopez said. “But if you ... are looking at the fish, or the organism that’s eating a lot of oysters, that is accumulating a lot of toxin to that next step.”

The EAA project would create new marshes south of Lake Okeechobee to filter out chemicals in the water as it heads to a reservoir. The reservoir would also help the water flow south.

The project would cost $1.6 billion and would have to compete with other approved projects for the money.

But Elgie Holstein, Senior Director of the Environmental Defense Fund, said the nationwide competition does not do much to solve the area’s water problems. 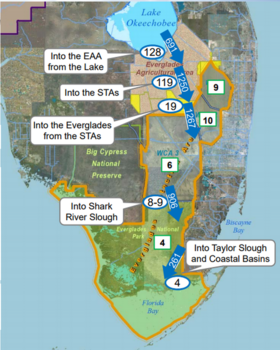 “What you tend to see is that resources get spread around, projects can take years to reach completion because they’re not done one at a time, the money is spread all over the country,” Holstein said.

Scientists and members of the business community agreed long-term infrastructure projects like storm water systems and shifting from septic tanks to sewer systems would go a long way towards solving the state’s problems.

Others pointed out the state could access other funding to help local communities, such as from the Clean Water State Revolving Fund. That funding is a joint effort by the state and federal government.

Florida is required to match 20% in order to receive federal funds. Aliki Moncrief, from Florida Conservation Voters, said the state should contribute more.

“Florida gets $45 to 55 million a year from the federal government to help local governments and local communities upgrade their waste water, deal with their septic issues,” Moncrief said. “There’s really a lot of creativity that can be employed in hot spot areas.”

Correction: The original version of this story identified the U.S. Representative for Florida's 22 Districts as Tim Deutch. The congressman's name is  Ted Deutch. We regret the error.

It appears that a noxious red tide algal bloom has reached one of Florida's main metropolitan areas.

The green, foul-smelling goop has been sighted in Intracoastal canals, near Annie Beck Park, and the Las Olas Isles neighborhood.

Adam Weinstein lives on the 15th street canal, and noticed the green floating patches near the dock behind his house two weeks ago.