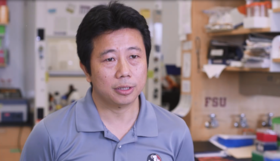 Scientists are trying to understand whether and how the Zika virus might be causing birth defects. Now researchers at Florida State University in collaboration with Johns Hopkins, say their work has moved a step closer to determining if there is a link between the virus and microcephaly.

“In addition, it will slow down the growth, potentially providing a link to neurological defects, such as micocephaly,” Tang said.

The Zika virus was discovered in the 1940's, and it usually results in flu like symptoms for adults. But recently, it has recently is blamed for causing a spike in the birth defect called microcephaly—babies born with smaller heads and developmental delays. The U.S. Centers for Disease Control is focusing its work in Brazil, which has more than 4,000 suspected and confirmed cases of Zika-linked microcephaly. However scientists have not found any definitive proof the disease is the cause.

“Potentially, this could explain why there is a link to microcephaly," said Guo-Li Ming, professor of neurology at Johns Hopkins University.

"But there is a lot more work needed to show the direct causal effect.”

Brazil has become the epicenter of the outbreak, but Florida now has more than four dozen cases of confirmed infections, including four pregnant women. All of the cases are travel-related.

CDC: Zika Infections Confirmed In 9 Pregnant Women In US

Zika infections have been confirmed in nine pregnant women in the United States, including one who gave birth to a baby with a rare birth defect, health officials said Friday.

Three pregnant Florida women have contracted the Zika virus, according to the Florida Department of Health. Researchers are studying possible links between Zika in pregnant women and birth defects in babies.

Health officials announced Tuesday that they are investigating 14 new U.S. cases of possible sexual transmission of the Zika virus.

The virus was confirmed to be in blood samples from two women, using a method that detects pieces of the virus' genetic material, say doctors from the Centers for Disease Control and Prevention.