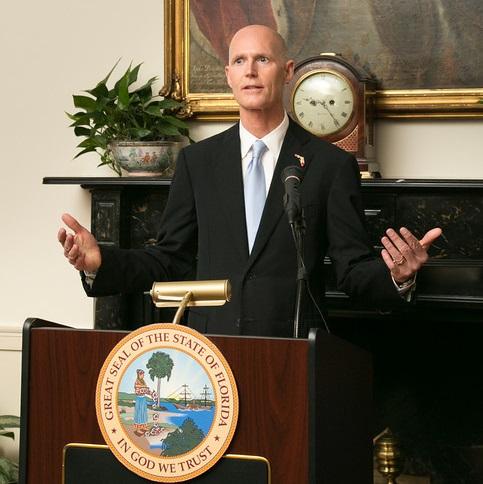 Florida Governor Rick Scott is hoping a better working relationship with Washington, D.C. will bring about a solution to the state’s ongoing battle over health care funding.

The Republican governor has clashed with President Obama’s White House over several issues — from environmental regulations to health care funding.

Scott, a former hospital executive, opposed expanding Medicaid to cover more low-income people, which was offered under Obamacare. He sided with Republican state lawmakers, who said there was no guarantee the federal government would continue to fund the expansion long term.

In Jacksonville this month, Scott said he looks forward to approaching the state’s challenges with a new administration in D.C.

“What’s nice now is Donald Trump’s a friend, Mike Pence is a friend, Reince Priebus  the chief of staff — is. I know Betsy DeVos who’s going to be the education secretary. I know Tom Price the congressman who’s going to be HHS (Health and Human Services secretary),” Scott said. “And so I’m going to work with them in each of those areas to make sure we have programs that work.”

The two-term governor said he’s confident the federal government will help Florida continue reimbursing hospitals that care for poor people. State lawmakers have struggled with the expected end of the Low Income Pool, a federal matching funds program that covers the uninsured who seek treatment at emergency rooms.

Some Democrats are skeptical of the new administration’s ability to deal with another impending Florida health funding crisis, while Republican state officials are as optimistic as the governor.

Consumer advocacy group Florida CHAIN released a new report Wednesday that once again calls for the expansion of Medicaid in the state.

The push comes despite the fact that Florida House lawmakers have shut down expansion of the health care for the poor each year since 2010.

Florida Governor Rick Scott is asking the Legislature to pass a $79.3 billion state budget next year.

At a news conference in Jacksonville Monday morning, Scott went over some of the highlights of his Florida First Budget.

One of those highlights is a substantial revision to how the state doles out money for indigent health care.

The Florida Senate is proposing $75 million for children's programs at hospitals that serve the poor.

The Safety Net Hospital Alliance of Florida supports the proposal, which would bring in just over $21 million for facilities in the Tampa Bay area.

LIP Funding Not Going Up

Florida legislators racing against the clock on a new state budget struck a deal Friday on a $2 billion plan to steer money to more than 200 hospitals that treat large numbers of low-income patients.

House and Senate budget negotiators will sink $400 million in state tax dollars to replace some of the lost federal funds from the Low Income Pool fund that is expected to end this summer.