Feral chickens are about as synonymous with Ybor City as the cigar factories that put it on the map. Ybor has changed since it was founded in the late 1800's. Now, there are night clubs and restaurants and art shops.

Bill Staton gives tours for the Ybor City State Museum. He said the only thing that's stayed the same are the chickens.

“The casitas we have here were the small houses that the factory workers lived in. They all typically kept chickens in their backyard which is part of their culture for food or eggs," said Stanton. "When the Cubans started to leave Ybor City in the 1940's when the cigar business started to decline, they tended to just release the chickens into the city.”

Chickens have been roaming around ever since.

It’s plausible the chickens here are related to feral chickens in Key West. That’s because a lot of Cuban cigar factories and their workers moved from Key West to Ybor.

“There’s a huge literature on the chicken in both agricultural and scientific settings," said Gering. "They haven’t been studied in ecological framework where they’re in a wild setting and where it’s a genetically variable population that’s evolving.”

Gering is now studying all three populations.  He said he’s looking for any common characteristics and unique idiosyncrasies among them particularly their reproduction and diet, how they live and how they die.

And that’s why Dylan Breese, president of the Ybor Chickens Society, scopes out feral chickens and takes stool samples from them.

“This is Frankenstein, right here, because he turns green when he goes into the sunlight," Breese said walking among a few chickens. "This is Casper. The black and yellow one is King Arthur, because it looks like he’s wearing gold chain mail”

Breese attracts the birds with corn kernels. And it looks like there’s going to be a cock fight.

“Arthur and Casper are new to this area. They hang out across the street," said Breese. "You will see territorial disputes when a new chicken is introduced.”

Breese said new chickens meet each other during his medical testing or when people abandon their pet chickens. He says unlike the ones born in the wild, the new chickens usually don’t survive.

“They do have a lot of natural predators," he said. "Hawks come through, raccoons. There are cats in the neighborhood and they have to contend with traffic and people.”

Breese demonstrated how he collects the samples he’ll send to Gering.

"Open one of the tubes, take a couple of toothpicks and just place into the tube, seal it, label it for recording purposes,” he said.

Breese said the actual stool collecting is about a 15 second process. But it takes more time before that. Hours, he said. He has to actually witness the chicken leave the poop behind. He also has to make sure he’s not collecting from chickens that are related. And, he said, some chickens are shy about pooping in front of people. 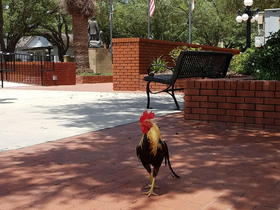 Others are not. In fact, Breese originally started the Ybor Chickens Society to create a more harmonious environment with the chickens and business owners.

“They can create some mess.  When there’s an event they can interfere a little bit," Breese said. "So, we try to take care of that so that the businesses and the events can go on peacefully.”

Next year, Gering, the Michigan State University evolutionary biologist, said he’ll have a better understanding of the data being collected.

From the stool samples he hopes to see if there are gene variations between feral chickens and chickens in production settings. He’s collecting blood samples from the chickens in Key West and Kauai. He does not know what the results will be.

“It seems feasible, certainly, that the Key West and Ybor chickens have a link," Gering said. "It’s also possible that those are genetically differentiated populations and that they have completely different ancestry.”

Either way, Gering said, the results will give him insight on the evolution of feral chicken populations and he said if the feral chickens have a gene that has gone extinct in chickens in more controlled environments, the data could tell us  how to preserve those bygone genes.

Mosquito Control Use Chicken And Fish To Combat Mosquitos

With more than 200 confirmed travel-related Zika virus cases throughout Florida, Pinellas County Mosquito Control is utilizing various tools to combat mosquitoes and the diseases they carry.

In eight locations across Pinellas County, there are a total of 56 sentinel chickens. Their job is to alert Mosquito Control officials to viruses present in various areas.

Last year, 53 chickens tested positive for the West Nile Virus. The areas affected were treated and there was only one person diagnosed with the virus.