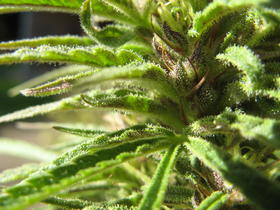 The Florida House is advancing a medical marijuana proposal packed with last minute changes to bring it closer to the Senate position.  But for some in the House, it’s a tough sell.

Early on, Majority Leader Ray Rodrigues zigged to the right on his medical cannabis proposal—incorporating ideas from marijuana opponents and picking up hardliners in his chamber.

But then at the eleventh hour, he zagged on them.

“You see there’s a Trojan horse stuck in this bill,” Rep. Julio Gonzalez (R-Venice) complains, “whether we meant it or not and that’s the chronic non-malignant pain definition.”

Rodrigues is now embracing the Senate position, giving doctors the green light to recommend the drug for pain so long as it’s tied to a qualifying condition like cancer, multiple sclerosis and the like.  Throughout this year’s session the Senate position has been less restrictive, and not just when it comes to pain.  Sen. Rob Bradley’s (R-Fleming Island) proposal has fewer requirements for caregivers, no 90-day doctor/patient relationship requirement—and central to the debate—lower thresholds when it comes to adding new growers.

But on that last bit Rodrigues says he’s struck a deal.

But he explains the House and Senate are still at odds over capping the number of storefronts a license holder can establish.  The Senate believes with a limited number of growers, unlimited storefronts could allow early entrants to monopolize the marketplace and inflate prices.  Rodrigues believes more storefronts means more access.

Rodrigues’ measure is now on its way to the Senate, and his moderation only cost him the votes of members on the extremes.

Rep. Gayle Harrell (R-Stuart) has been outspoken in her opposition to cannabis but she came on board because she believes a state tracking system will keep physicians from recommending the drug excessively.

Across the aisle, though, Rep. Carlos Guillermo Smith (D-Orlando) says the bill is still too restrictive when it comes to treating pain.  He notes chronic obstructive pulmonary disease or COPD.

“So would we rather this person get prescription opioids to handle the pain?” Smith asks.  “Maybe they’re chasing those pills down with booze—who knows?  Or would we prefer that they smoke a bowl and go to sleep and they actually wake up the next morning?”

Senators plan to take up their version of medical cannabis legislation Tuesday.

Eligible patients would not have to wait 90 days to get medical marijuana if doctors recommend the treatment, under a compromise measure ready for a House vote just days before next Friday's end of the annual legislative session.

As legislators work out the details of implementing medical marijuana, pharmacists at the University of South Florida are determining how to deliver it as medication.

House lawmakers could be in for a long fight over medical marijuana when it hits the floor.  The bill’s sponsor is finding common ground with the Senate, but Democrats have filed 25 amendments.

Florida patients wouldn't have to wait 90 days to purchase marijuana if doctors recommend the treatment, under a proposal on its way to the Senate floor for a vote.

Medical marijuana measures in the House and Senate are heading to the floor.  Lawmakers are making some last minute adjustments ahead of negotiations.