The Far-Reaching Effects Of A Mass Shooting: Hospital Lockdowns Leave Some Stranded

On the afternoon of Feb. 14, Fawn Patterson got a call from her daughter telling her to come to the hospital.

Amanda Ray Carrillo was pregnant with her fifth child, and she was bleeding. She’d been admitted to Broward Health Medical Center in Fort Lauderdale the day before but hadn’t gotten answers yet about what was wrong. She wanted her mom to be there when the doctor came to explain.

When Patterson got to the hospital, there was a security guard blocking the door. The facility was on lockdown after receiving several victims from Marjory Stoneman Douglas High School. Earlier that day, a gunman had killed 17 people and injured another 17 at the school.

“I have a daughter up there who is seven months pregnant, bleeding, and I can’t get in to see her,” Patterson said that afternoon, as she lingered on the sidewalk outside the emergency room. “If there’s somebody up there that’s worse off, and a family member would like to see them before something happens, nobody can get in.”

Listen
Listening...
/
Listen here to the audio version of this story.

Patterson was one of dozens of family members and friends waiting outside the hospital to see loved ones who were being treated for medical concerns unrelated to the shooting. And in the hours after the massacre, there was a lot of misinformation and a lot of fear.

Hospital administrators in Broward County — and in Orlando, where medical professionals treated victims of the mass shooting at Pulse nightclub a year and a half  earlier — said enhanced security protocols like lockdowns are standard when victims of violence are being treated. They argued it’s necessary to keep all patients and staff safe. 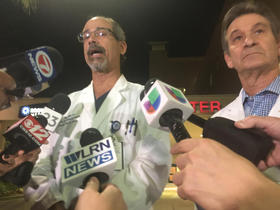 “In a time of crisis like this, it’s better to have control over the situation,” Louis Yogel, chief of medical staff at the hospital, told reporters gathered there the night of the shooting, “You have better control when you control who is coming in and who is coming out.”

But for people caught in the middle of the chaos, the lockdowns were distressing — and they demonstrated the far-reaching ripple effects of a mass shooting on an entire community.

Patterson, who lives near Port Everglades, stood around on the sidewalk and in the parking lot, talking to a few other people who were in the same situation and reporters who were arriving at the hospital for updates about the shooting. No one knew why they couldn't go in.

”[I’m] very frustrated, very angry and very upset,” Patterson said. Referring to her daughter, she added: “And so is she.”

They had been talking over the phone. Carrillo’s husband, Roberto Gonzalez, and their children, were in a hospital room with her watching news coverage of the shooting on television.

Gonzalez said they heard that the suspect was being brought to the hospital where they were, in Fort Lauderdale. He went downstairs to try to find out more but was told to return to his wife’s room and stay there.

“You don’t know if someone is going to come to the hospital to hurt that boy,” Gonzalez said. “I have all my family with me at that time. I’m feeling vulnerable because we’re in the hospital. And then for something like that to happen … it was terrifying.”

He said he noticed the increased security and was comforted by it.

Outside, Patterson also believed the confessed shooter, Nikolas Cruz, was at the hospital and that was why she wasn’t allowed to go in.

Later, it was announced that Cruz had been treated briefly at another hospital in the system — Broward Health North in Deerfield Beach — and then released to police custody.

People outside were confused and upset.

“I don’t know why they won’t let us in,” Patterson said. “They said ‘safety precaution,’ but the shooter is not here.” 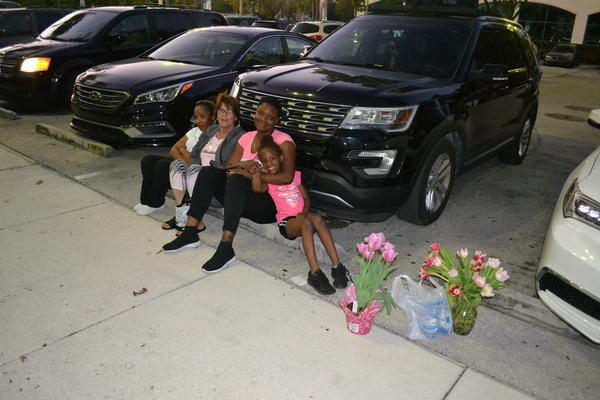 As the afternoon turned to evening, and Patterson wondered if she should keep waiting or head home, she sat on a concrete block in the parking lot with two other women who were also hoping to get into the hospital. They laughed and remarked: After three hours of waiting together, they were friends now.

Joedonna Harrison was there with her daughter, Jayanna, and her friend Shoshanna Campbell. A close friend and co-worker of theirs, Beverly, was suffering from cancer and had been told she didn’t have much longer to live.

Harrison, of Lauderdale Lakes, said Beverly — they didn’t want to say her last name — was like her mom.

“We grew up together,” Harrison said. “She been there for me from day one. … I come every day to see her.”

The women had a clear glass vase and a flower pot wrapped in pink paper with white hearts on it — both containers filled with pink tulips — sitting next to them on the blacktop. The flowers were from their other colleagues. Harrison lamented that they had already started to open, and her little girl said they looked like they were dying.

Campbell, who also lives in Lauderdale Lakes, said she worried what might happen if she had to come back the next day.

“I feel bad for the parents and the situation. It really dawns on me, too,” she said, referring to the shooting. The number of victims had just been announced.

The lockdown began at around 4 p.m. A few hours into it, tensions were running high, and people were crowding the entrance of the emergency room trying to persuade staff to let them inside the hospital. 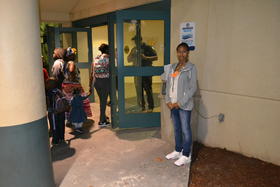 “I have no words. I’m just lost,” said Porcha McIntosh. She lives in New York but had been in South Florida visiting family when she gave birth prematurely. Her newborn son, Calieb, was suffering from choanal atresia, which means his nasal passages weren’t fully developed.

She wouldn’t budge from the door, in a near state of panic.

“Anything that happens, … I have no way of knowing,” she said. Her phone was dying.

At around 7 p.m., a hospital staff member told security guards they needed to clear the doorway, because there was about to be a shift change and a lot of workers would be coming in and out.

After the transition, there was a different person guarding the door. McIntosh said the staff member escorted her inside to be with her son. She stayed there with him the rest of the night.

At one point, a spokeswoman for the hospital told reporters the lockdowns in place at both the hospital in Fort Lauderdale and the other one in Deerfield Beach would be in effect until 8 a.m. She said later they ended up lifting them at about 9 p.m., after five hours.

When it was starting to get dark, two doctors who helped lead the Fort Lauderdale hospital’s response to the shooting emerged to provide an update to reporters.

Seven victims of the school shooting had been taken to that hospital. The other one, Broward Health North, is about 12 miles from Marjory Stoneman Douglas, and it received nine patients — including Cruz. He was treated for breathing difficulties and then released into police custody.

The lockdowns continued after Cruz had been arrested and was no longer in the hospital's care.

Benny Menendez, chief of emergency medicine at Broward Health Medical Center, said then that it was a precaution.

“Nobody should come in or come out [of] this institution until we make sure that the perimeter is clear and nobody will come and attempt anything else,” Menendez said.

The doctors stressed the hospital was still "open for business" — people who needed medical treatment were not being turned away.

Also, Menendez said family members of the shooting victims were being kept informed inside the hospital. Jennifer Smith, a spokeswoman for Broward Health, said later it was "standard protocol when working with law enforcement during an active investigation" to allow family members of victims in the hospital, even during a lockdown.

Smith, declined a request for a follow-up interview on the system’s security protocols. She wrote in an email that the lockdowns were “standard operating procedure during a crisis situation.”

The head of security at another major Florida hospital network agreed.

“Being in a posture of prevention is just the best way to do business,” said Bryan Margeson, corporate security manager for Orlando Health. The private hospital chain treated victims of the Pulse nightclub shooting in June 2016.

Margeson said when a mass casualty incident is the result of violence, hospital administrators worry about worst-case scenarios — like a suspect coming to the hospital to further harm victims, someone trying to retaliate against a perpetrator or big crowds of people rushing emergency rooms.

So when there's a crisis at his hospitals, security guards patrol the entrances, questioning people about why they need to come in. If they’re not there for medical care, they’re not a high priority.

“Our first and foremost responsibility is treating the patients, and that overrides everything,” he said.

Margeson likened preparing his hospitals for potential problems after violent incidents to seeing a tornado warning on TV and bringing your patio set inside.

“You may or may not suffer the consequences of the bad weather, and your furniture never would have been destroyed or flipped over or blown into the pool,” he said. “But it’s a precautionary [measure].” 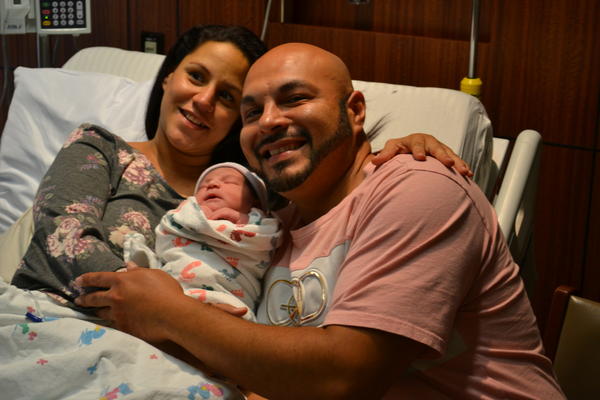 McIntosh, whose premature baby was in the neonatal intensive care unit, was released from the hospital about three months after his birth on Dec. 29. She said he’s doing better but is still breathing with a tube in his throat.

Carrillo’s complications with her pregnancy turned out to be not too serious. She was treated and released from the hospital the day after the shooting.

Two months later, she was back — to have her fifth child. Amaya Gonzalez was born on April 16 — eight pounds, 13 ounces, and 21 inches long.

“She’s beautiful. She’s a perfect little girl,” Carrillo said in her hospital room a few hours after the birth. “We’re so excited.”

This time her mom was by her bedside.

"We are the long-term people." That's how  Dr. Judith Aronson-Ramos, a member of the Advisory Board of Parkland Cares, describes the mission of the organization.

The father of a student killed in a mass shooting at a Florida high school is suing the armed officer who stood outside the building as people were massacred within.

A group of teenagers formed a circle in the middle of a former school library turned community meeting space in Liberty City on a recent Saturday afternoon.

Aliyah Blackmon, a junior at Miami Norland,  is standing in the middle reading from a sheet of paper.

“Step up if you haven’t been sleeping due to the recent gun violence in our neighborhood,” she said.

A few teens step up.

Nearly all of the teens stepped forward.

A Marjory Stoneman Douglas student alleges he was aggressively questioned by school administrators and local law enforcement after posting on social media that he fired an assault weapon at a gun range with his dad.

A piece of legislation under consideration in Florida this week has received a lot of attention because of a controversial provision that would allow some teachers to have guns in schools. But the proposed law would also designate an influx of cash for mental health services.