Fact Checking Will Weatherford on $30 a Month Health Care Plans

TweetShareGoogle+Email
Listen
Listening...
/
WUSF's Craig Kopp talks with PolitiFact's Josh Gillin about House Speaker Will Weatherford's claim that Medicaid does not need to expand because that group can get health insurance from the ACA for 30 dollars a month. 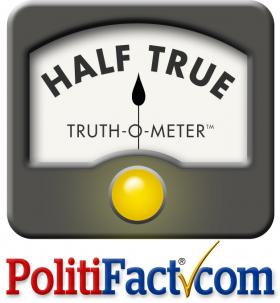 The March 31st deadline is approaching for folks to sign up for a health insurance plan that's compliant with the "Affordable Care Act".

Meanwhile, Florida state lawmakers are back at work and Democrats are, once again, trying to get the state to accept federal dollars under Obamacare to expand Medicaid in the state.

House Speaker Will Weatherford was totally against the idea last year - and there's no indication he's changed his mind this year.

And besides, Weatherford told the Tampa Bay Times editorial board there's no reason to because about "half the people who would qualify can buy a plan on the federal exchange for $30 a month."

But, PolitiFact gave Weatherford's statement a "half true" rating.

"The problem with what the Speaker said is the proportion of it," Gillin explained. "There have been several estimates. The state has one, a few foundations have some, Georgetown looked at one and basically what we figured out was that it was actually closer to about a third of people who make somewhere between 100% and 130% of the federal poverty level, which is about $12,000 - which is the poverty line."

So, Weatherford overestimated how many potential Medicaid recipients would qualify for $30 a month  healthcare plans under the Affordable Care act, and that's why Politifact ruled his statement "half true."