'Enough Is Enough!' Thousands In South Florida Demand Change At March For Our Lives

The first of more than 800 March For Our Lives events in Washington, D.C., the U.S. and around the world took place early on Saturday on the island of Pohnpei in the Pacific nation of Micronesia.

Here in South Florida, things kicked off, fittingly, in Parkland - which was the site of the February 14 mass shooting at Marjory Stoneman Douglas High School that killed 17 people and ignited the student-led #NeverAgain movement for stricter gun control and school safety. Marches were also held in Miami Beach, Boca Raton and Key West.

At Parkland's Pine Trails Park, thousands gathered for the 10 a.m. march chanting "Enough is enough!" and waving signs that read: "Am I Next?" "Protect Kids, Not Guns." "Take away your guns, not our lives."

Among the groups marching are Mom's Demand Action. Marchers were also told they can register to vote at the rally by texting "fight" to 788-683.

READ MORE: Here's What You Need to Know If You Are Going to Parkland's March For Our Lives Saturday

Before the two-mile Parkland march to Douglas High got underway, Douglas sophomore Sari Kauffman addressed the crowd saying: "Remember that policy change isn't nearly as difficult as losing a loved one." She also asked marchers to get 17 other people to register to vote.

The Parkland marchers were only supposed to take up four lanes of traffic on Pineland Island Road - but the crowd became so massive they ended up filling all eight lanes. 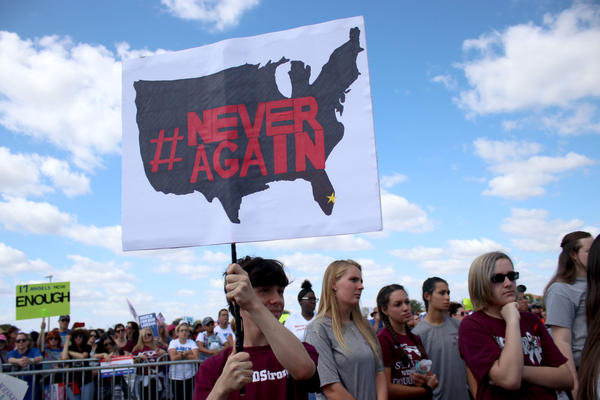 "I was feeling very proud, very inspired and very moved by the amount of people who showed up today," said Jesus Caro, who teaches speech and debate at Douglas High and also spoke at the pre-march rally.

"Seeing the voice and the activism and the leadership that the students are expressing and living also brings a sense of comfort to your teachers, because we are seeing our work is valuable, is fruitful."

Cameron Kasky - one of scores of Parkland students and parents who traveled to Washington D.C. for the main March For Our Lives event, spoke to the crowd there and demanded a ban on assault weapons like the AR-15 rifle used in the February massacre.

"We hereby promise to fix the broken system we've been forced into and create a better world for the generations to come," Kasky said. "Don't worry, we've got this." 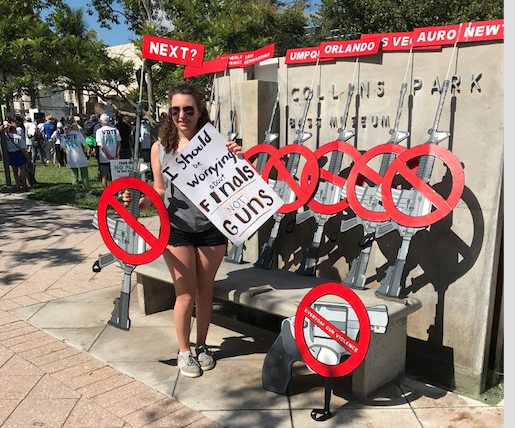 Carvalho's remarks reflected the tone of the Miami Beach event, where marchers directed much of their ire at politicians who get funding from the gun lobby. Activists there handed out orange "$1.05" price tags to sardonically symbolize what they argue is the value some politicians place on students' lives based on that funding. Many Miami Beach marchers tied the tags to their wrists or backpacks.

"Politicians need to be held accountable for this because they're the ones creating laws," said Elijah Horesh, a Parkland native, Douglas High graduate and University of Miami student. "They are collectively our government, and they need to do something."

Florida Senator Marco Rubio, who's reportedly received $3.3 million from the National Rifle Association (NRA), was a particular target of many protesters. "He's in the South Florida community," said Miami artist Melanie Oliva.  "He should be listening to us and to the kids specifically." (At a CNN town hall gathering with Parkland students after the shooting, Rubio defended his NRA funding, insisting the gun lobby had endorsed his gun rights agenda, not the other way around.)

Melanie Oliva is at the Miami Beach Senior High School #MarchForOurLives. Many of the protesters here have singled out @marcorubio for taking contributions from the NRA. @WLRN pic.twitter.com/E53wWxYsIF— Kate Stein (@stein_katherine) March 24, 2018

"Everyone should have been outraged when 6- and 7-year-olds were killed, but they weren't," said Folden. "And a lot of people say it's because they didn't have the voice and the articulation. So hopefully that's the difference. Hopefully that's the change."

Thousands also took to the streets in Boca Raton - including even Canadian snowbirds like Jean Kesten, 62, of Toronto. 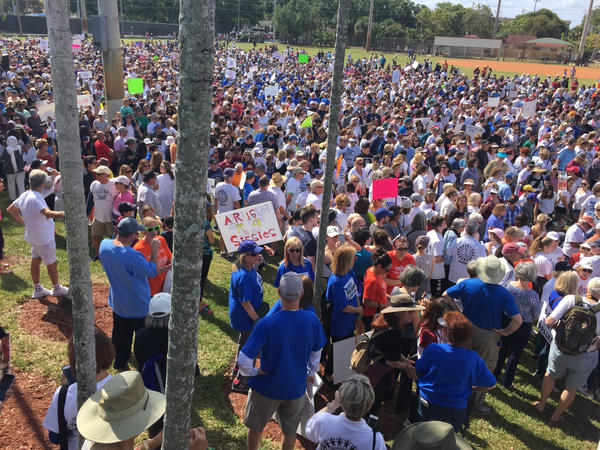 The Boca Raton protesters concluded their march at the Mizner Park Ampitheater for a rally for gun control and to honor the Parkland shooting victims.

"I'm here to support the movement," said Ana Louis, 50. "I'm not against guns. They have a purpose. But it's not for killing individuals."

Louis' 13-year-old daughter Sophia said she felt moved to become more civic-minded, especially on the gun issue: "We need to make sure we are heard now, wherever and whenever there's an opportunity." 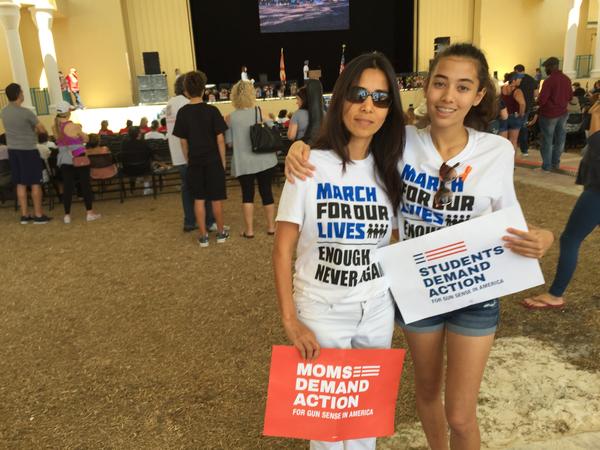 At the other end of South Florida in Key West, Police Chief Donie Lee came out in solidarity with the march there: "These kids are making change," Lee said, "and I want to be part of it." 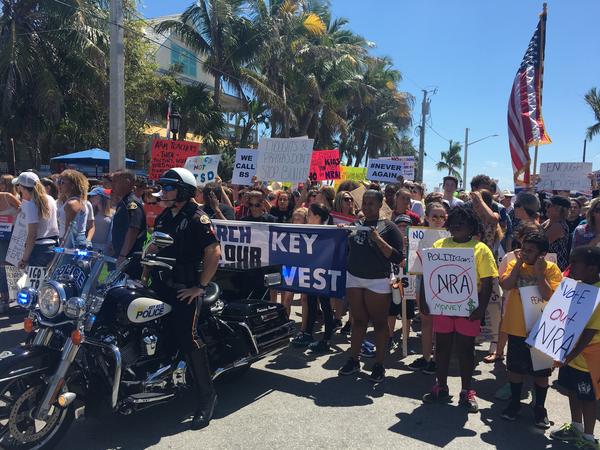 Among the marchers was Nadine Smith, executive director of the LGBT rights group Equality Florida. The March For Our Lives happened to coincide with her organization's Saturday night Key West gala, and she was wearing a blue T-shirt honoring the victims of the Pulse nightclub mass shooting in Orlando that killed 49 people.

"I do think this is a turning point. People are waking up to the fact that the NRA they remember is not the NRA of today. They think of it as Field and Stream and hunting and gun safety, when [today] it's really Soldier of Fortune breeding this gun culture, and more important paying off politicians or intimidating them into supporting an irrational gun policy that is quite literally costing lives." 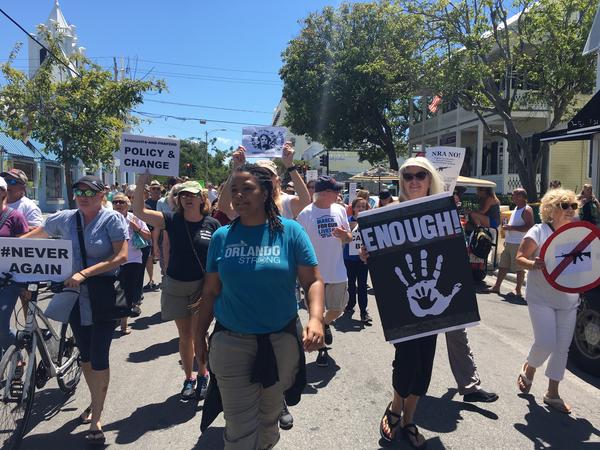 Students Organize 'March For Our Lives' Throughout Tampa Bay

Madison Vogel had never organized a protest before.

But following the school shooting at Marjory Stoneman Douglas High in Parkland, the Osceola High School senior got together with 35 other Pinellas County students and created a companion event to a national march against gun violence.

Ignited by the deadly shooting in Parkland, tens of thousands of Tampa Bay area teenagers plan to demonstrate for gun reform on Saturday. Beyond making a statement, many of the students hope to register and mobilize young people to vote.