Ending Rape on Campus a Matter of Consent

TweetShareGoogle+Email
Listen
Listening...
/
University of Miami students come together to raise awareness to sexual assault on campus. They do it through Canes Consent, the creation of professor Dr. Katherine Westaway.

There's a disturbing reality about college life today. Roughly one in four students, predominantly women, will become victims of some form of sexual assault, according to a new survey.

That's according to the Association of American Universities (AAU).  It  recently released a  survey of 150,000 students from 27 universities. What the survey shows is that about 23 percent reported an incident of sexual assault including sexual misconduct due to physical force, threats of physical force or incapacitation. A little more than 10 percent said they experienced sexual assault due to penetration. 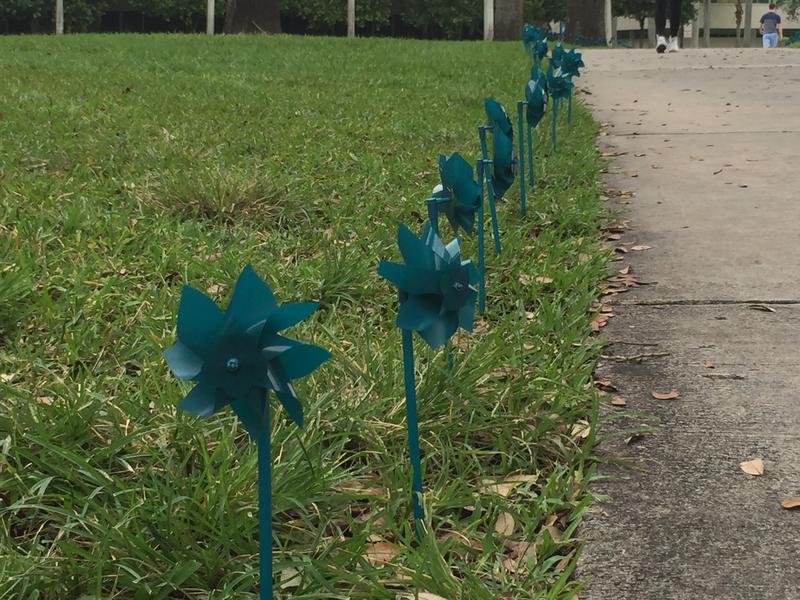 These figures don't usually match what one might see on a university's crime statistics. As an example, the University of Miami crime statistics (p.23) show that on average there are about four to five sexual assault cases reported on campus annually. There are another four in student residences reported at the same time.

If the AAU statistics are right, then there would be many more.  To demonstrate this, a campus group planted pinwheels along one of the walkways in the center of campus. There were more than 450, and they represent each man and woman expected to be a victim of sexual assault based on those statistics.

The greatest challenge for advocates battling the problem across the nation's university campuses is simply reporting. People don't want to come forward and admit what has happened.

The AAU survey shows that reporting of incidents is low, between 5 and 28 percent depending on the severity of the crime.

Tony Lake is UM's the associate dean of students and the director of judicial affairs. He agrees that there are more assaults than are reported.

"It's a lot worse than schools want to point  to, absolutely. No school wants to admit that there's an issue on their campus."

But he points out one reason why those figures don't match.

"Statistics are tricky, because what gets reported are instances that come through, not the final resolution of those cases. The requirement is violation of the law. If something is just reported to us and not the U.M.P.D. [university police] we have to work it out with them to see if the incident, as it was described to us, is also a violation of the law."

Dean Lake believes the numbers will begin climbing as more students start coming forward and reporting their assaults. And it is starting to happen at schools across the U.S. In a report by the Washington Post, many universities are already showing increases in the number of sexual assaults on campus. They found that reports of sexual assault on campuses were up 50 percent in a three-year period between 2009 and 2012. 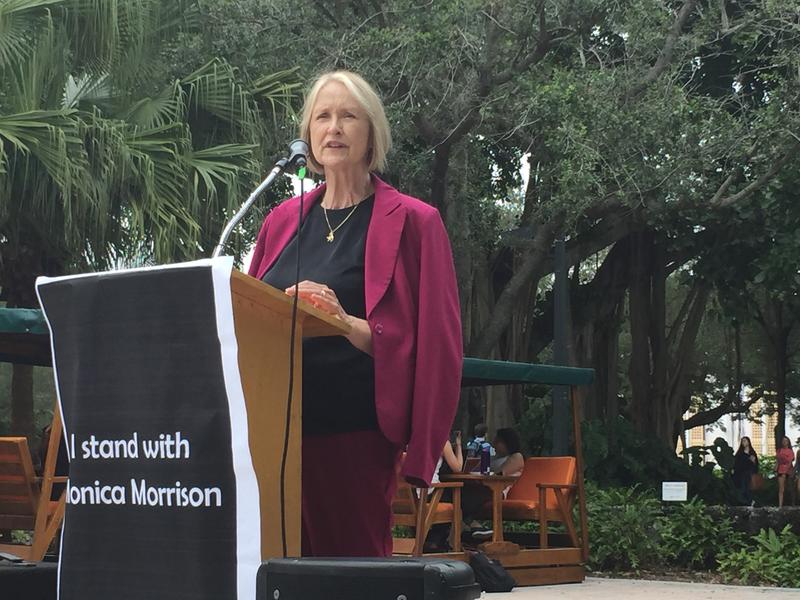 Not everyone thinks universities are reporting enough. Patricia Ireland is one of them.  Ireland, the former president of the National Organization for Women, is a 1975 UM graduate. She believes universities are afraid to step forward on this issue.

"Universities are concerned with their image and with lawsuits. They're also worried that the federal funding is going to be at risk because there's been a change in Title IX."

Ireland is talking about the fact that the U.S. Department of Education is now going after institutions of higher education for not following the law created to rid schools of discrimination. There are specific rules within the law that are focused on how university officials must deal with cases of sexual harassment and sexual assault.   This was made clear in 2011 in a "dear colleague" letter. Last year the DOE also released a list of 55 schools under investigation for their handling of sexual assault complaints. The only Florida school on the list was Florida State University.

The other part of Ireland's comment, that universities are facing lawsuits,  is also happening in some cases. Kevin Parisi is a student at Drew University in New Jersey who  filed a lawsuit against the school alleging that the university hurt his academic career, although he had not been found responsible for an alleged assault. 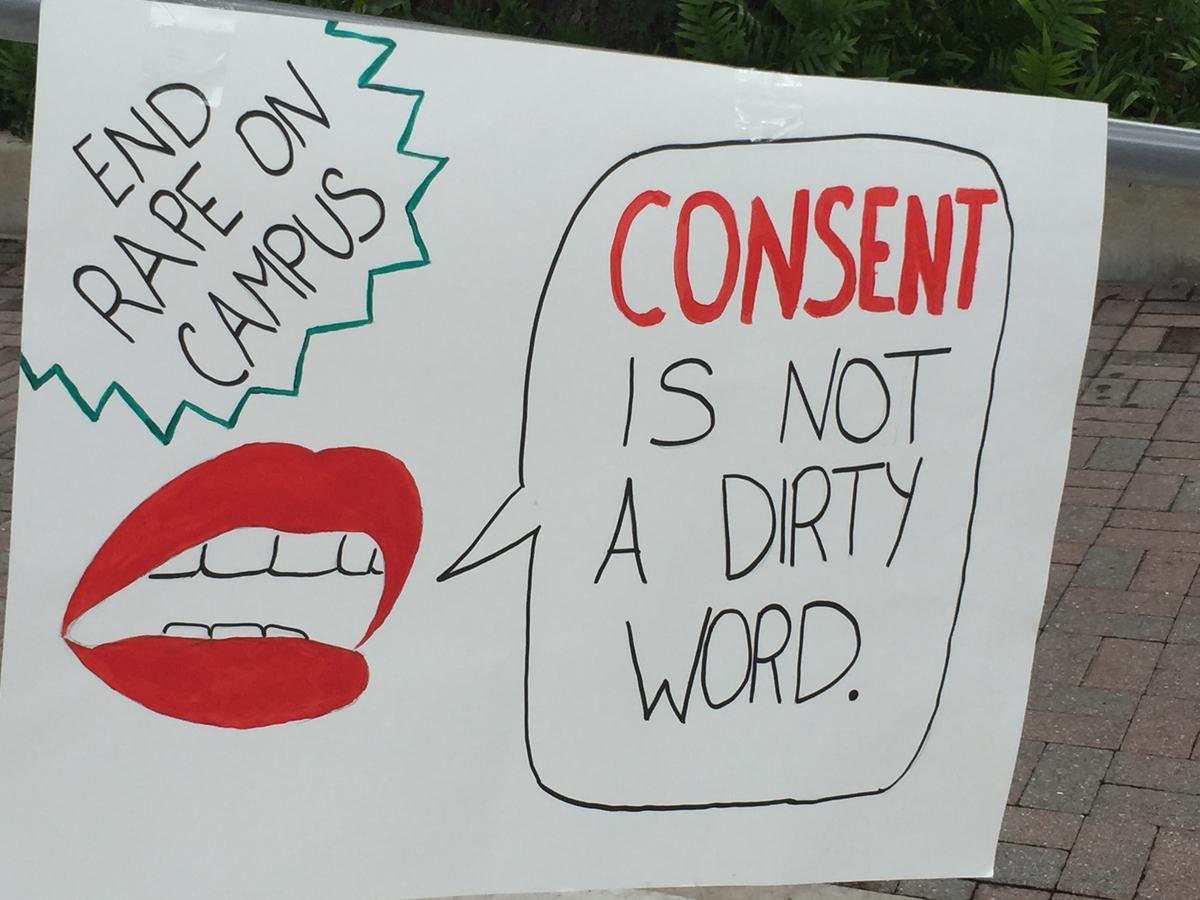 Canes Consent is the brainchild of Dr. Katherine Westaway. She started the program three years ago and now guides her students to organize events each semester. This term, it was the students of her newly created Sex and Sexuality class who put the event together.

The event and the class are her attempts at changing attitudes about sex, which she believes will end sexual assault.

"We still have a huge problem talking honestly about sex. What happens with that is we do not talk about affirmative consent. Then, when people get raped, they think it's their fault."

Dr. Westaway has her own personal history with the topic, being a victim herself many years ago in school. At the end of each Canes Consent, victims, whether they have identified themselves or not, step up and stand together to bring attention to their stories. It's also a sort of jab at the university in some cases. There have been young women who have spoken out against the university's handling of their cases, claiming that their assailant wasn't punished or wasn't kept a safe distance from the accuser. 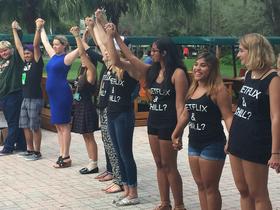 Victims come forward during Canes Consent to share their stories. Some don't give their name because they fear their attacker may retaliate, especially if they're still on campus.

Dr. Westaway believes this is important in the mission, to hear from those who have been victimized.

"I think it's the best revelation of what the experience is really like and I think this is the best way to change people's hearts and minds. When you hear one or two rape stories, you're not going to think about it the same."

The university provides services to students who are victims of sexual assault. They include the Sexual Assault Resource Team (S.A.R.T.). There's also on-campus counseling. And, there's the Rape Treatment Center at Jackson Memorial Hospital. (3o5-585-5185).

Over the past 15 years in Polk County, more than half of the rape kits collected in criminal cases remain untested in evidence rooms, the Ledger of Lakeland reports.

According to the Ledger, 1,643 rape kits have been collected in the 3,544 reports of rapes, attempted rapes and sodomy in the past 15 years.