Despite Progress, Problems—New And Old—Pop Up In Florida's Medicaid Managed Care Program 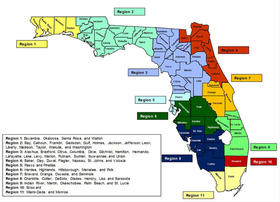 Florida recently finished rolling out a new way of providing care to more than 3.5 million low-income Floridians. Nearly all of them are now enrolled in managed care plans. The state agency that runs Medicaid recently released a series of comments from various players in the industry praising the rollout. But some groups say the new system is still plagued with problems.

When Florida lawmakers decided three years ago, to revamp the Medicaid, the goal was to make costs more predictable. Medicaid is the single biggest part of Florida’s budget but physicians have historically been paid below what it costs to treat a patient. The federal health law, the Affordable Care Act, gave primary care doctors a payment increase—bringing rates up to Medicare levels. But Adriana Castro, a Miami Pediatrician whose Medicaid clients make up a third of her practice, is having a hard time getting paid by the HMO’s the right amount for her services.

“Whatever Medicaid offers and pays, they should pay the same thing," Castro says of the HMOs.

Castro recently wrote a letter to the state about the issue and  is a provider for three of the state’s managed care companies: Coventry, United and AmeriGroup. She says each company is paying different amounts for different services.  Before the switch, Castro was receiving the proper payment amounts from the state, but the state isn’t managing the system anymore. Castro says she used to have about 40 percent of her Medicaid clients in managed care. Now, it’s 100 percent, exacerbating the payment problem.

“The payment discrepancies were there from the beginning, it’s just that now we feel it more because everyone’s in the system and the system has the errors," she says.

The Florida Agency For Healthcare Administration says it has received Castro’s letter and says the most it should take for a doctor to be paid is three months. HMO’s have a choice to pay the higher rate at once, or pay the difference separately. Under the statewide Medicaid Managed care system Florida has given the dollars it otherwise would have paid directly to doctors, to the HMO’s and physicians and consumers sign up. But only a third of Medicaid recipients selected a plan. Most were defaulted into HMO’s chosen by the state, something Tallahassee pediatrician Louis St. Petery sees as a problem.

“We see kids everyday whose mom wanted this plan and they got put on that plan. They’ve got more than one child and one child goes to this doctor and another goes to that doctor, and they’ve had extreme difficulty getting that straight," he says.

St. Petery is the Executive Vice President of the Florida Pediatric Society which has been involved in a lawsuit against the state over the way it reimburses children’s services under Medicaid for years. That case still isn’t resolved. And then, there are the dentists, who were fellow plaintiffs in the lawsuit.

“You have to re-credential with the new companies, and some of them [the HMOs], they’re taking as much as six months to re-credential these people even though they’ve been a provider with Medicaid for 15, 20 years," says Florida Dental Association President Richard Stevenson, who practices in Jacksonville.

Part of the original concerns with managed care was that insurance companies would further shrink provider reimbursement rates as a way to turn a profit. An insurer in Broward, called MCNA Dental, has done that, Stevenson says.

“They reduced the current Medicaid fees for the existing people who had been working in the system for many years. Florida’s 50th out of 50states to begin with and to reduce by another 20 to 30 percent, it won’t be sustainable for those people to continue seeing patients," he says.

Stevenson is worried other HMO’s will do the same thing. But the issue of payment is not new. Florida has historically ranked among the worst states for Medicaid reimbursements and that hasn’t changed under the new Managed Care System. But, not all providers are displeased with the new system. In a letter to AHCA which the agency recently sent out to the media, Tampa orthodontist Chris Butchart says the state has done a good job rolling out managed care.

The roll out of the program has gone very well.  All of the insurance companies; Dentaquest, Liberty and MCNA have worked hard in cooperation with me as a provider to make the transition as smooth as possible. They have also coordinated with the staff at AHCA who as always have been extremely helpful.

In addition the new program has had some benefits when compared to the traditional fee for service medicaid program.  This is especially true with regards to the access to care for specialists.  Under the old system it was very difficult to find specialists for patients.  The dental plans have made the access to these specialists especially oral surgeons very easy and often personally assist the patients in finding specialists.

On a final note all of the plans have shown their dedication by providing personal representatives that respond promptly to any concerns.  Even their dental directors have personally reached out when asked to. I have been very impressed with their dedication to he success of the program.

Butchart did not return calls for comments for this story.

Meanwhile, The Agency for Health Care Administration says it’s aware of the issues raised by the doctors.

“As we did the rollout, we were watching everything," says AHCA Medicaid Secretary Justin Senior.

He says now that the transition is done, the agency will begin to work on the problems that have cropped up. Starting with making it easier for providers to register with the HMO’s, by creating a one-stop shop for them to go for registration. And when it comes to the low numbers of people selecting a plan, Senior says the agency sent several letters to consumers warning of the switch. He explains the numbers this way:

“It’s important to understand that prior to this program there were a large number of people that were already in managed care plans in Florida. As we told people…if they didn’t make a choice we’d leave them in a plan they’d already chosen. Which means, closer to 65-70 percent of the population is in a health plan they chose.”

AHCA also acknowledges the issue of low reimbursement rates, but says it doesn’t get involved unless the health plan loses too many providers.  If that happens, it becomes a network adequacy issue—and that’s when the agency can act.

Many health care advocates say it’s still too early to tell whether the state’s new Medicaid Managed Care system will work out. The state is hoping managed care system will help it get control of costs, and improve patient care. But physicians continue to worry if something isn’t done to address costs, doctors will leave—and it will continue to be hard for Medicaid recipients to find treatment options outside of the more expensive, emergency room.

It’s much too soon to say whether this summer’s flood of Florida Medicaid patients into private managed-care plans will accomplish the state’s goals of improving access to care and saving money.

But one result is already clear: The overhaul is concentrating power in the hands of specialty companies over which the state has no direct control.  Some say one such company has essentially taken over home care services and equipment.

A Third With Medicaid Chose Own Plan

Only about one-third of Florida’s Medicaid recipients transitioning into managed care statewide chose their own health insurance plans.

Enrollment for the general population started in May and ended in August. Consumers received a letter in the mail two months before enrollment and were given at least 30 days to choose an insurance plan. Those who did not choose a plan were automatically enrolled into a plan by state health officials.

State Cracks Down on Medicaid Marketing

Florida has banned health insurance companies from marketing their plans directly to Medicaid recipients as the state rolls out its massive plan to privatize its health insurance program for low-income individuals and the disabled.