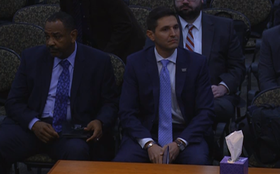 Governor Ron DeSantis and the Florida Cabinet approved Danny Burgess Jr. Thursday as the Department of Veterans' Affairs Director. Burgess is a former Pasco County Republican Representative who in November defeated his opponent by a nearly 2-1 margin.

“I had not really known him that well but when you meet him I think he’s just a good guy, has got a great heart." said DeSantis. "Great work ethic a lot of energy and I think he’s going to do a really good job for Florida’s veterans.”

During his interview with the Cabinet, Burgess said there is a need for more transitional programs for veterans.

“As a person that’s in the military myself right now, I think that there are a number of things that we need to continue to build upon and a lot of those revolved around transitional services." Burgess said. "We have the largest number of post 9/11 veterans coming to the state of Florida, and moving to the state of Florida in the entire country. And we need to be there for them as there just starting their lives, they’re just transitioning out of the military.”

Burgess explained, “Ways that we can do that is through transitional services. Through occupational licensing, streamlining all of that to help them find good solid careers here in the state of Florida. And not have to reinvent the entire wheel, when they are highly trained, highly skilled operators over there overseas in very intense environments they can come and do that here in Florida and we want that.”

Attorney General Ashley Moody said working as a judge she often saw veterans in the criminal justice system and asked what Burgess would do to address the veteran crime rate.

“I think there should be a veteran’s court in every circuit in the state of Florida. What an awesome opportunity I know you’ve presided over those. That is something that I would love to work on and look at how we can take that statewide,” Burgess said.

Veterans Courts are designed to assist veterans who may be dealing with underlying behavioral issues, and substance abuse issues unique to the traumatic experience of war.

Agriculture Commissioner Nikki Fried initially said that Burgess was brought forward without a transparent process according to the state’ sunshine laws. But ultimately she approved Burgess Thursday.

“I just want to say that Representative Burgess is an excellent choice on behalf of our states veterans. And I’ll be pleased to approve his nomination today. And I’m glad that the public has had an opportunity to participate in this important decision coming before the cabinet,” Fried said.

Burgess will have to leave his Pasco house seat. The governor has not set a date for a special election but a few candidates have already filed for the seat.

How The Federal Shutdown Is Affecting Health Programs

There seems to be no end in sight for the current partial government shutdown, the third since the beginning of the Trump administration.

For the vast majority of the federal government's public health efforts, though, it's business as usual.

Bill Would Allow VA To Prescribe Medical Marijuana In Some States

Sen. Bill Nelson filed a bill last week that would provide veterans with access to medical marijuana at the VA and open doors for more research on the drug.

Intersection: The Road To Better Care For Veterans

'The VA Is On A Path Toward Recovery,' Secretary Of Veterans Affairs Says

"We have a clear mandate to do better, [and] to make sure that we're honoring our mission to serve our veterans," Shulkin told NPR's Morning Edition.