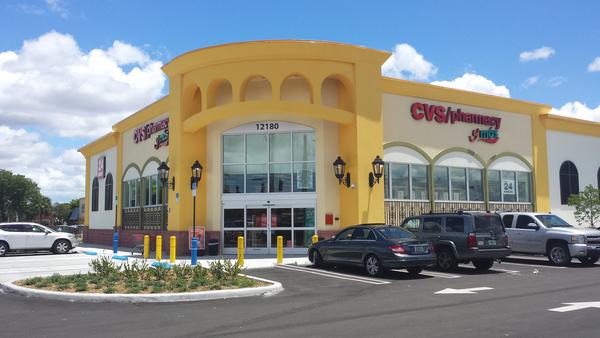 This comes less than a year after the Rhode Island-based giant bought Miami-based Navarro Discount Pharmacy, touted as the largest Hispanic-owned drugstore chain in the country.

“CVS absolutely respects that [Navarro] is a well recognized name in South Florida and a very successful brand,” says Gabriel Navarro. The former Navarro CEO is now CVS’ chief of Hispanic consumer growth. “So absolutely the focus here is to learn from Navarro to better serve the Hispanic consumers throughout the U.S.”

“You walk into many national retailers today who are making an effort to service the Hispanic consumer and they might have a 4-foot Hispanic health and beauty set or a 4-foot Hispanic grocery set,” says Gabriel Navarro. “We’ve exerted a lot of effort to integrate 1,500 items through the stores.”

The stores will also house a digital services center that, according to the CVS release, will feature “an authorized dealer and payment center for metroPCS, bill payments services for utilities, phone and cable, and money transfer services to a wide variety of countries.”

Gabriel Navarro told WLRN that CVS hopes to expand the concept nationally but, at the moment, there’s no timeline for doing so.

Below, a map of “CVS/pharmacy y más” locations.

The CVS retail chain is no longer selling tobacco products in its 7,700 stores -- including at more than 700 stores in Florida -- about a month before schedule, according to the South Florida Business Journal. The company, which stands to lose about $2 billion in annual tobacco sales, is also changing its name to CVS Health.

The state of Florida recently endured a terrible epidemic; prescription drug abuse. Approximately 7 persons died daily in our state from prescription drug overdoses. This was fueled by the proliferation of “pill mills” that dispensed millions of units of oxycodone, carisoprodol, and alprazolam.

Pharmacies were also involved the dispensing of these drugs. Walgreens and CVS Pharmacy were fined tens of millions of dollars by the Drug Enforcement Administration (DEA) for violating rules and regulations for dispensing controlled substances.

Saying it is "the right thing for us to do for our customers and our company to help people on their path to better health," the CEO of CVS Caremark announced Wednesday that the company's 7,600 pharmacies will stop selling cigarettes and tobacco products by Oct. 1.

Larry Merlo also said CVS will try to help those who want to quit smoking with a "robust national smoking cessation program" at its locations.

One company that was going to help enroll uninsured Floridians in health insurance through the federal online Marketplace has dropped out in the face of state officials’ continuing hostility to everything about the Affordable Care Act.