Pharmacy giant CVS says it will soon make the overdose-reversing drug Naloxone available at its Florida stores without a prescription. 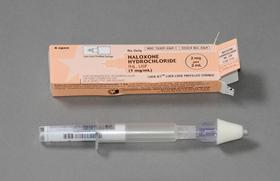 Commonly known as “Narcan,” the drug quickly reverses the sedating effects of opiates that dangerously slow heart rate and breathing.  Naloxone is the primary tool for emergency room doctors and first responders.

Now, CVS says it will begin selling the drug at its 878 stores in Florida in early July. A company spokeswoman says customers can expect to pay $90 for a two-dose kit that can be carried or stored for emergencies.

Naloxone Soon Available Over The Counter

A prescription drug that counters the effects of an opioid overdose will soon be available over the counter.

Listen
Listening...
/
0:58
Indoor tobacco smoking was banned in Florida in 2002 as an amendment to Florida's Clean Indoor Air Act, which was passed in 1985. HB 1143 would revise the definition of "smoking" to include nicotine dispensing devices, like e-cigarettes.

At the front of a classroom, health worker Cheryll Moore demonstrates "the nod" — a jerk of the head forward and then quickly back — a telltale sign of heroin use, though not necessarily of an overdose.

"In that scenario, they can go either way," she said. "I would not leave them alone."

After an hour or so of instruction that includes spotting signs of a life-threatening overdose, the class of ordinary people — couples, co-workers, parents, retirees and others — leaves with two vials of the prescription heroin antidote naloxone, better known by its brand name, Narcan.

Florida is experiencing an epidemic of opioid use and opioid overdose. When an opioid overdose occurs there are precious few seconds to save a person’s life.

A caregiver or family member may find their loved one or patient unresponsive from an opioid overdose—unable to help them — and have little recourse except to call for emergency assistance and hope that help comes in time.  Often, a needless death is not prevented.

However, an immediate injection of the drug Naloxone could help prevent this unintentional tragedy.