"When we moved to Southwest Florida from the Pacific Northwest we were surprised that Florida doesn't have a plastic bag ban plastic bags that end up in the ocean hurt wildlife and people get used to bringing their own reusable bags and it seems like a no brainer to keep the state beautiful and protect the environment.”

Bill Veach chairs the Marine Resource Task Force of Fort Myers Beach. And just this year, the town council came to the task force to look for a ban on plastic straws.

The Lani Kai Island Resort on Fort Myers Beach just got biodegradable straws last year, but the straws aren't made of paper. Melissa Schneider, with the hotel, shows off a small cache of bright green plant-based straws that will soon have to be replaced. 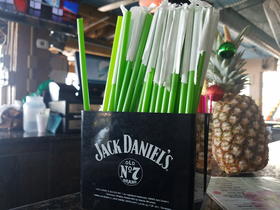 “We have a little under 60 days to now like use that remnants. Before we go into the paper version, because they're biodegradable you know they break down with the environment," said Schneider. "But the town wanted to even further protect the beach and protect the community.”

Schneider said the resort is happy to make the environment cleaner.

Back in November, after coming to an agreement on banning plastic straws, Fort Myers Beach wanted to tackle plastic bags next. But Veach from the Marine Resource Task Force said they put the brakes on that idea. Coral Gables, a seaside community near just south of Miami, tried to ban plastic bags and is now in a legal skirmish.

“They were sued by the state and by the retail association," Veach said. "They went to court and recently. They won the case, saying that the state legislature has not done what they were supposed to do which was make take actions based on this department of environmental protection report. It is now in the state is appealing it."

He said they’re now waiting on that ruling to see how Fort Myers Beach should proceed.

Miriam Ramos is the attorney for Coral Cables. She said the city is being sued because there are a couple of Florida statutes that preempt municipalities from banning items like plastic bags.

“We litigate the case in circuit court judge agreed with the city of Coral Gables and we ended up with the all three Florida statutes being found unconstitutional," said Ramos. "Upon that ruling we felt that we were on the appropriate legal footing to move forward then with a plastic bag ordinance which we did.”

However, after that ruling, the state of Florida appealed. And was joined by the Florida Retail Federation.

Samantha Padgett is a lawyer with the federation. She said the group’s mission is to stand up for retailers who serve their customers—providing plastic bags is part of that service for some.

"The statute clearly states that there is not to be any local regulation of plastic bags whether it's a ban a tax a limitation you know it just physically regulates it. That is not supposed to take place at the local level. So overall that's our end,” she said.

So, Veach, with the Marine Resource Task Force for Fort Myers Beach, said he’s waiting on a ruling regarding Coral Gables plastic bag ban to determine how they should proceed.

“We're a town of 6,000 people with a tenth the size of a Coral Gables and half of the average income," he said. "And I don't think that our town really wants to take on big legal battles just to try to set a precedent.”

Ramos, the attorney for Coral Gables, said the ruling could take anywhere from a week to several months. She said other cities around Florida have contacted her to say that they’re keeping an eye on the litigation, hoping to implement bans of their own.

A Florida Senate committee has advanced a bill that gives certain Florida coastal communities the power to temporarily ban or regulate the use of plastic bags.

The Committee on Environmental Preservation and Conservation gave the measure its first-round approval on Wednesday, gifting a small victory to those who have fought for similar legislation to pass since 2013.