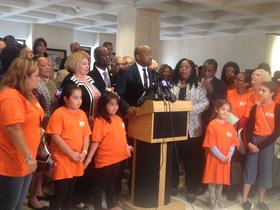 Hundreds of people crowded inside and outside a Senate committee room Monday for the first hearing of the gun safety bills in the Senate Rules committee.

Katherine Guerra and Bela Urbina were two fo the people who spoke. They're students from Marjory Stoneman Douglas High School, where 17 people were killed and more than a dozen injured.

“The only argument that most people are saying it’s for sport or for hunting or for self-defense. An AR-15 is not meant for self-defense. You would not use it for personal, something that has high velocity with rapid fire, to defend yourself or for sport.”

“The assault rifles are meant for killing things in a rapid amount of time. So, when you go hunting, it’s not like it’s not like there’s going to be 15 deer lined up in a line, and you’re going to go buh-buh-buh-buh, and kill all those deer.”

Both students wanted an assault weapons ban, which is not included in the gun safety bills.

What is included is increasing the minimum age for a person to purchase and own a firearm to 21, banning the sale of bump stocks, and providing time for background checks.

Law enforcement may also seize weapons from someone who is deemed mentally ill, involuntary committed to an institution under the Baker Act, and is deemed a threat. A person who is mentally ill would also be prohibited from possessing or purchasing a gun.

Another is a public records exemption to protect the personal information of victims and their families.

“That would be accomplished by codifying and enhancing the activities of the multi-agency network for students with emotional and behavioral disabilities (SEDNET), require each school district to designate a school safety specialist, and each school to establish a threat assessment team to provide a coordinated approach to evaluating and responding to students who pose a threat,” he said.

There’s also a “school marshal” program, allowing for certain designated people who have completed law enforcement officer training to have a gun on school grounds. That NRA-backed provision could include teachers.

He spoke during at a press conference Monday with other Democratic lawmakers from both the House and Senate. Braynon thinks the legislation goes too far.

“What we are doing with that proposal is we have gone from not doing enough to actually doing harm, and that I think is a real problem,” he added. “It’s one thing for me to stand here and say this bill doesn’t’ go far enough. These things that are done are good, but you could do more. It’s another things when you we start saying that we’re doing something that in my opinion will put my children, our children, in harm’s way.”

Three Senate Democrats tried and failed to tack on amendments to the bill, which includes getting rid of the marshal program and an assault weapons ban. One amendment by Sen. Braynon did unanimously pass. It creates a Medical Reimbursement Program for Victims of Mass Shootings.

Meanwhile, over on the House side, top leaders say they’re also working with Democrats on the issue, like Rep. Katie Edwards-Walpole (D-Plantation) and Rep. Jared Moskowitz (D-Coral Springs).

Moskowitz says in speaking with the Parkland shooting survivors, his goal is to try and get something out now in the last couple weeks, and try to do more in future legislative sessions.

“Everybody has their role,” he said, speaking to reporters last week. “So, there are Democrats out there that are helping push, that are bringing kids up here, that are organizing rallies…they’re helping push the issue. I look at my role as to get something done.”

The House version of the bill was filed Monday, and is scheduled to be taken up in the Appropriations committee Tuesday morning.

Congress Returns Amid Pressure To Act On Gun Violence

After a 10-day break, members of Congress are returning to work under hefty pressure to respond to the outcry over gun violence. But no plan appears ready to take off despite a long list of proposals, including many from President Donald Trump.

Mike Fernandez has raised millions of dollars for mostly Republican politicians, but he says no one seeking public office will get his money if they don't support gun control.