More than 100 supporters of the nonprofit The AIDS Healthcare Foundation rallied in front of Fort Lauderdale City Hall Monday night.

Chanting,"Healthy housing for all!" the group wore white T-shirts that said, "Love Thy Neighbor."

The foundation is trying to build a 680-unit micro-apartment tower in the city's downtown but has met opposition from nearby residents who expressed concern over lack of services for potentially formerly homeless people living in the building, and about the size and density of the development.

"I think it's important that everyone has access to housing, it's really that simple," Robin Schwartz, a supporter of the development said. "I don't really understand why it's so controversial. We need affordable housing. Who wants a community that's all one economic status? We should all live together."

The average rent for apartments across Broward County is more than $1,800 per month, according to county data. 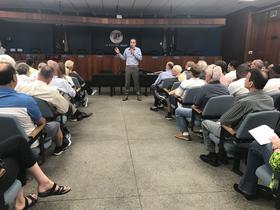 Kevin Cochrane lives in a neighborhood near where the proposed 15-story tower would go up. He came to the meeting to hear about the city's review of the project.  He opposes the project and believes it would not offer quality housing, or social services, for people living in the building who may have experienced homelessness.

"AHF [AIDS Healthcare Foundation] is trying to entangle so many issues together that are actually all very separate issues," Cochrane said. "There's the general affordability crisis across all parts of this city. You don't solve that by just putting one building in, and requiring everyone to live in that one building. Regardless of the people that live there, what we know is one thing: it's inadequate, substandard housing. Let's get them standard housing."

City staff have already reviewed the project and sent the AIDS Healthcare Foundation comments on its proposal. The city is waiting for a response from the foundation before the development can move forward in the process and go before the city commission for a vote.

Over the last week, city residents have expressed opposition to the project on social media, citing doubts over how well potential residents would be vetted. Some people have asked if the units are only for people living with HIV, or if the building is a shelter.

Fort Lauderdale’s vice mayor is a key player in the city’s efforts to help the homeless population by providing them with yearlong housing, job opportunities and mental health services.

An administrative law judge recommended Tuesday that the state Agency for Health Care Administration toss aside agreements it signed for treatment of Medicaid beneficiaries with HIV and AIDS in three South Florida counties.

An AIDS advocacy group sued Scott for refusing to release the documents as part of a public records request.

Moving quickly, an appeals court has scheduled a hearing next week in a public-records lawsuit about whether Gov. Rick Scott should be required to turn over his calendar to an organization locked in a battle with the state about Medicaid contracts.