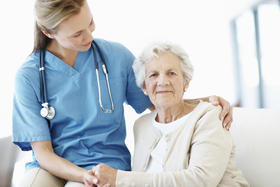 The Florida Constitution Revision Commission convenes every twenty years to review proposals to the state constitution. A proposed bill of rights for nursing home residents has proven contentious.

Proposal 88 to the Constitution Revision Commission would introduce a “Nursing Home Bill of Rights” to the state constitution, including the right to a safe, comfortable environment for nursing home residents.

Steve Watrel, an attorney and Board Member with the Florida Justice Association, explained that the proposal is a reaction to Hurricane Irma. Over twelve nursing home residents died in a nursing home in Hollywood, Florida, many from heat exposure. Watrel says it makes sense, in a state as prone to natural disasters as Florida, to ensure residents the right to a safe environment.

But Brecht Heuchan, who filed the proposal, sees even more fundamental issues that need to be addressed. Heuchan is a CRC Commissioner. When he crafted the proposal, he included the right for residents to access courts and a jury system. Heuchan says residents can lose this right when they’re admitted to nursing homes.

“When you’re trying to find a nursing home bed, you’re handed a stack of documents that’s 50, 70, 80, 100 pages long, and buried in those documents are these arbitration clauses," Heuchan said. "The very nature of those clauses is signing away of your right to a court.”

Arbitration is a method of dispute resolution, in which two parties select a neutral decision maker. In an arbitration agreement, a party agrees to waive the right to sue and to a trial by jury. The American Bar Association recommends prohibiting pre-dispute agreements, which are made before an issue even arises.

The Florida Health Care Association asserts that arbitration agreements made between nursing homes and residents are voluntary and not a requirement of admission. But Watrel says that’s not always the reality.  He references his career as a personal injury lawyer.

“People feel a lot of pressure to sign it," he explained. "Everybody that I deal with has said, well either I didn’t know about it because they just gave me this signature page, or, I didn’t know what to do because my mom was there and she needed care, and they promised me they would give good care and they didn’t.”

The FHCA argues that arbitration agreements allow for a fair form of dispute resolution that is more expedient, cost-effective, and informal than court action. Bob Asztalos is the Chief Lobbyist for the FHCA. He argues that the proposal would do away with that out-of-court option and encourage predatory law practices instead.

Heuchan finds that logic ridiculous. “It’s a known fact that lawsuits go down," he said. "When there’s people being cared for better and less harm done to them, on what grounds would a lawyer have to sue?”

He says his ultimate goal is to protect residents. “Part of what I’m trying to do is change a culture that says look, it’s less expensive for us to care well for someone than to not care well for them.”

Proposal 88 passed its first committee vote last week. The CRC will hold public hearings between now and May, where the public can weigh in with their thoughts on this and other proposals. If Proposal 88 passes the Commission’s final vote, you’ll see it on the ballot in November.

After drawing widespread opposition from business and agriculture groups, a proposal to redefine legal standing for Floridians on environmental issues won’t go before voters in November.

Florida voters may be asked in November to weigh in on medical malpractice.

A proposal to ban oil drilling in Florida's coastal waters  has been approved by a Constitution Revision Commission panel.

A proposal to ban oil drilling in Florida's coastal waters was approved Thursday by a Constitution Revision Commission panel.

`Certificates Of Need' Could Land On Ballot

Free-market advocates for years have tried unsuccessfully to convince the Florida Legislature to eliminate requirements for the state to approve the construction of new nursing homes and hospitals and the provision of new services such as organ transplants or pediatric open-heart surgery.