About two dozen parents from Parkland, where 17 people were killed last month by a gunman, traveled from South Florida to the hearing in St. Petersburg. They’re advocating for new language introduced into a proposed amendment about property rights.

‘If we can get our public, our voters to decide on what we want, in our Florida Constitution, I think we should have that voice,’ said Shelbie Seys, a mother of three children in public schools in Parkland. 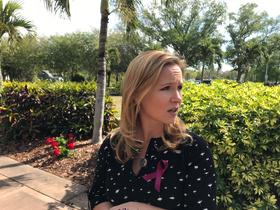 Since the high school shooting at Marjory Stoneman Douglas High a month ago, Seys has been among the parents lobby for gun restrictions in Tallahassee. She said this proposal goes farther than what Gov. Rick Scott signed into law last week. And if passed, it would be permanent, she said.

“There could be a governor in the future that could take that back, and then we would be taking a step back in the wrong direction,” she said.

The parents from Parkland were among dozens who attended a League of Women Voters rally before the hearing, held at the University of South Florida St. Petersburg. At the rally, several Tampa Bay area high school students also endorsed the new proposal, which would beef up rules passed just last week by Florida’s legislature

“If we had taken action when the first school shooting happened in America, we would not have this problem. Nicolas Cruz would not have murdered children,” said Safiyyah Ameer, 14, and a student at Blake High School in Tampa.

The amendment added Tuesday includes letting voters decide the assault-weapons ban, if gun buyers should be 21 years of age and if the waiting period to buy firearms should increase from three days to 10. 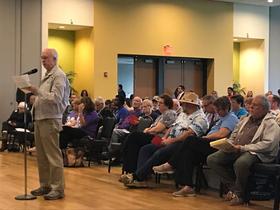 Nearly 400 people signed up to speak at the final hearing for Florida’s Constitution Revision Commission. In addition to the gun issue, greyhound racing, charter schools, privacy and reproductive rights were among the more controversial amendments being considered for addition to November’s ballot.

Instead of applause, attendees were asked to wave green or red signs to show support or opposition to a speaker’s topic. A proposal to ban greyhound racing drew dozens of supporters and opponents – and a handful of dogs.

Carey Theil of the Greyhound Protection Group, or Grey2K, spoke in support of the ban. Theil, president of the national anti-racing group, said he realizes a ban will affect the lives of those who work in dog racing, but isn’t worried about the political battle.

"Compassion and a commitment to the better angels of our nature also means rejecting cynicism, rejecting rationalizations of cruelty, rejecting false equivalencies and rejecting personal attacks," he said.

Theil argued that voters are the best ones to decide this issue. Several efforts to ban dog racing in Florida have failed to pass in the state legislature.

Another issue garnering attention before the hearing Tuesday was one being pushed by victim advocates.  Supporters of ‘Marsy’s Law’ got an endorsement earlier in the day from Gov. Scott.

“Victims have victim’s advocates. They have an opportunity to have an attorney,” said Frank McDermott, a criminal defense attorney in St. Petersburg. “And I’ve never been in a situation where the victim’s rights have not been observed and have not been protected.”

Commissioner and Sen. Darryl Rousson, D-St. Petersburg, said while he appreciates the works of the elected and non-elected appointees, he feels the 36 proposals lean more toward issues popular with Republicans.

“I wish there were a few more philosophies outside of party that would be reflected in the proposals,” he said of the commission which convenes just once every 20 years.

Can Students Be Punished For Walking Out? One Florida Student Says She Was

Students from across the country are planning to participate in a coordinated national walkout on Wednesday in response to the high school shooting in Parkland.

Students Across US Walk Out Of Class To Protest Gun Violence

In a wave of demonstrations reaching from Arizona to Maine, students at dozens of U.S. high schools walked out of class Wednesday to protest gun violence and honor the victims of last week's deadly shooting in Florida.

Now formally facing the death penalty, the suspect in the Valentine's Day school shooting that killed 17 people in Parkland is headed for a court appearance Wednesday on a 34-count indictment.

It’s been close to a month since the school shooting at Marjory Stoneman Douglas High School that left 17 people dead and 15 more injured. In a city neighboring Parkland, one museum is making art therapy for students a weekly ritual.

Kathryn Doll is an art therapist and one of the licensed clinical social workers leading the art healing group at the Coral Springs Museum of Art.