In 1994, Kellie Greene was the victim of a rape. Three years later, thanks to DNA evidence, police found the perpetrator who was sentenced to 25 years in prison.

But other victims haven't received the same closure, as there may be thousands of unprocessed sexual assault kits in the state of Florida. 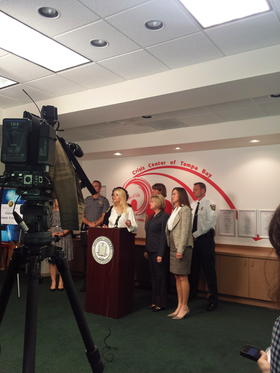 Florida Attorney General Pam Bondi on Wednesday called for more funding in the next state budget to process the sexual assault kits.

Right now, Bondi said the Florida Department of Law Enforcement is conducting a study on the number of untested kits and will present the findings to the Legislature in January. The state has committed over $300,000 for it.

"Hidden in those estimated thousands of untested rape kits, we have the potential to solve cold cases and lock up sexual predators, make Florida the safest place to live and raise a family," Bondi said.

Greene, a victim advocate for the Peace Corps, was among those joining the Attorney General at the Crisis Center of Tampa Bay. Greene's case was solved thanks to DNA evidence.

She says processing the kits will help convict perpetrators, and provide peace of mind.

"It gives back a sense of safety to [victims], so that they can continue living in their communities without having to look over their shoulder," she said. "Without having to wonder 'Is that the person that raped me standing in front of me in line in the grocery store?' or 'sitting behind me in a movie theater?'"

Bondi said she plans to ask for more money to alleviate the backlog of kits sitting in crime labs, untested for evidence. She said it has been a problem a nationwide in recent years.

The Joyful Heart Foundation, founded by actress Mariska Hargitay when she played a detective on Law & Order: Special Victims Unit, is an advocacy group for rape victims.

It has pushed the issue of ending rape kit testing backlogs nationwide. It defines a backlogged kit as one that hasn't been submitted to an accredited public or private crime lab for testing within 10 days of being booked into evidence, or hasn't been tested within 30 days of receipt by a crime lab.

The Jacksonville Sheriff's Office said in July it had 1,500 backlogged cases on its evidence shelves, with some more than a decade old. The Hollywood Police Department in Broward County turned up 94 untested kits, while the Pasco County Sheriff's Office found 340 kits in 2014 that hadn't been sent for testing. All three agencies say they're working toward ending the backlog.

Bondi says sometimes a suspect will plead guilty before the kits need to be analyzed, but it's still important to collect the DNA in case it's a match for other crimes.

Although officials don't know how severe the backlogs are at local police agencies, part of the quandary is the cost of processing. It costs around $800 to $1,000 per kit to test. Some jurisdictions decline to process the kits in certain circumstances, such as when a suspect confesses.

Bondi added that another problem comes from a lack of funding at the FDLE, where crime lab analysts are paid less than their counterparts in other states.

The FDLE recently asked for $35 million to hire more DNA analysts and pay them a competitive salary. Bondi said it's unclear how much money the FDLE will really need to hire more analysts — it could take more than $35 million — to plow through the backlog.

Bondi said that enhanced DNA technology means that some cases might be solved now, when they weren't in the past.

"We have the potential to solve cold cases and lock up sexual predators," she said.

Over the past 15 years in Polk County, more than half of the rape kits collected in criminal cases remain untested in evidence rooms, the Ledger of Lakeland reports.

According to the Ledger, 1,643 rape kits have been collected in the 3,544 reports of rapes, attempted rapes and sodomy in the past 15 years.