Bills Filed To Help Deaf Floridians Who May Face Arrest 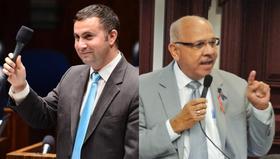 Two state lawmakers are hoping to offer more to help deaf Floridians, who are facing arrest.

Sen. Darren Soto (D-Orlando) says he filed the bill because of a woman in his district.

Soto says she got her daughter back, only after agreeing to a plea deal.

“And, it really highlighted the potential for disastrous interactions between law enforcement officers and deaf Floridians when the officer may not be familiar with the right protocols to interact in this situation,” he added.

Soto says he’s heard other similar stories. So, he filed a bill to help deaf Floridians.

“My bill creates ID cards. It also establishes protocols and training for law enforcement dealing with and approaching deaf Floridians and it requires for contracting with certified interpreters as well as utilizing interpreters as soon as possible, ideally during the arrest,” he continued.

Under Soto’s bill, the Florida Department of Highway Safety and Motor Vehicles is required to create a form so a deaf person can apply for an ID and a placard for the car. Rep. Victor Torres (D-Orlando), the bill’s House sponsor, says the measure also establishes a database for deaf Floridians who drive.

“That’s basically it,” said Torres. “You know, to help the individuals out there who are deaf, who are driving around, and we wanted to make sure that they have this protection, and the officers as well. You don’t want officers misinterpreting because they felt that they’re being ignored by the person, though. We need to have them be aware of this.”

And, as a former law enforcement officer, Torres says he’s seen this type of system work—not just in situations when deaf people are facing arrests.

“Being from law enforcement from New York City transit police, we got training on it and we got cards that gave us simple hand signs, you know, just in the beginning, so if you’re aiding somebody or if they’re injured, you can get basic information and talk to them by getting that knowledge,” he added.

Both Torres and Soto filed measures last year, but they never had a hearing. Soto says he’s gotten a commitment from Senate President Andy Gardiner, as a disability advocate, to get his bill heard in 2016.