Bill Making It Easier For Certain People To Get Back Confiscated Guns Passes Fla. House 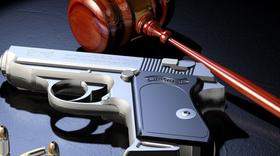 The Florida House has passed a bill making it easier for law enforcement to return firearms to certain gun owners without a court order.

In his capacity as a lawyer, Rep. Cord Byrd (R-Neptune Beach) handled a case in 2016 in which his client could not get his gun back without a court order.

He says it all started when a father and son got into an argument over a telephone call.

“The son—being vindictive—called law enforcement, and said, ‘my father threatened to commit suicide,’” said Byrd. “Law enforcement went out to the home, talked to the father, no one was using drugs, no threats had been made, [and] there was no alcohol. They said, ‘hey, do you have any firearms in the home? Let’s just make sure everything’s calmed down.’ He said, ‘ yes,’ and turned over the firearms. A few days pass, he goes to get them back, and then they said, ‘we need a court order.’ So, he hired an attorney, filed the court order, and the Sheriff’s office came in and had no objection. They didn’t say, hey, we still think there’s a problem.’ They just didn’t object.”

To get his gun back, Byrd’s client had to pay a court filing fee of $400, and thousands of dollars more in attorney’s fees.

“Part of my legal practice, and when people call me, one of the first questions I ask them is, ‘what is the value of the firearm?’ And, when I explain to them what it costs to go to court, what it costs to pay an attorney, it ends up being cheaper to forfeit that firearm and go purchase a new one, because there’s nothing prohibiting them from then buying a firearm because once again, they haven’t been convicted anything, there are no pending charges,” he added.

So, Byrd wants to repeal the so-called “Breach of the Peace” statute as it relates to law enforcement returning property—firearms and pistols in particular.

“Many times law enforcement will be called to a scene, will be called to diffuse a scene, sometimes will come out to a safety call, and as part of that procedure, will take a firearm or retain a firearm for a period of time,” he continued. “So, they then use the breach of the peace statute as a ‘catch all’ to then require a court order for the return of that firearm when no criminal charges have been filed. So, what has happened is that has treated a class of property different than we treat any other class of property in Florida.”

Some lawmakers expressed concerns about domestic violence cases, which Byrd insists would not fall under returning property under this “Breach of the Peace Statute.”

He says that would be another process because the defendant received a civil injunction, also known as a restraining order.

Still, Rep. Cynthia Stafford (D-Miami) says some “domestic violence” disturbances could fall under the “breaching the peace.” That’s because law enforcement may respond to a call—disturbing the peace—involving an abuser who may not be charged with a crime.

“What if there is no civil injunction, or no type of protective order in place,” she asked. “And, there is a 911 call, domestic violence, there’s a weapon in the house, law enforcement arrives, there’s no arrests made, they take the gun…so, they’re to then give it back when they just had a dv call, even though there’s no arrest made, again?

But, Rep. Ramon Alexander (D-Tallahassee) says he’s not so convinced about that as a scenario, adding he sees this helping the people he represents.

“In the people I represent, I see it creating barriers, financial barriers,” he said. “Anytime, you’re paying more for court fees, than the actual cost of a gun, that’s a problem to me. Many of my constituents have a very basic understanding of the law and the process of the law, and they may not know the process to go through to get their gun back.”

And, while the measure passed the Florida House 88-24, a Senate companion bill has not yet been filed.

The Florida House has passed a bill making it easier for firearm dealers to pay for background checks.

A bill seeking to make it easier for firearm dealers to pay for the criminal background checks has unanimously passed its first Senate committee.

The Florida lawmaker who authored this year’s changes to Florida’s Stand Your Ground law says the legislature does have the right to update the law. It’s in response to a judge’s ruling Monday declaring the revised version unconstitutional.