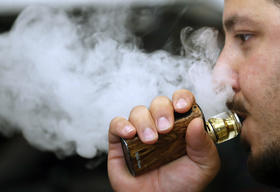 A bill implementing a constitutional amendment that bans vaping in businesses passed its first committee Tuesday. But as Blaise Gainey reports, legislators, advocates and critics must now answer the question – What is vaping?

Some want electronic cigarettes, or devices used to vape, to be defined as tobacco products. Aimee Diaz Lyon represents the American Lung Association.

“This we believe would provide clear authority for the comprehensive statewide prevention and use program to engage in prevention and education around the use of electronic smoking devices,” said Lyon.

“I visited some other state I mean they vaporize CBD, there’s some tobacco products where they eliminate tobacco altogether and there’s just a juice flavor," said Bracy.

Bracy asked Mark Landreth of the American Heart Association why he thinks vaporizers should be defined as tobacco products.

“The combustible tobacco product the biggest problem with it is the nicotine that’s in it. And that’s the vast majority of what’s in the pods that individuals use in their vaping,” said Landreth.

But Bracy maintains labeling e-cigarettes as tobacco is misleading.

“Then there are people that use vaping to get off of nicotine. So they may start to use the juice that has nicotine in it, but then a lot of people get to the point where they eliminate it all together. And they’re just basically vaping a juice, a flavored juice,” said Bracy.

Joshua Unger, owner of Von Vape in Sarasota, agrees. He says he’s seen it with his own eyes.

“I personally have witnessed hundreds of people in hundreds of stores in the state transition from smoking to vaping and then to not vaping. I personally vape 0 nicotine that is an accurate statement it does exist it’s 30% of my business,” said Unger.

One subject that didn’t come up in the debate is the enforcement of the soon-to-be-law. In the bill it says a maximum penalty would not exceed 25 dollars. Violators could also do 50 hours of community service or could complete a school-approved anti-tobacco program.

The Juul’s So Cool, Kids Smoke It In School

The students wait eagerly for their teachers to turn their backs.

That’s their cue to reach quietly for a small, sleek device they can easily conceal in their palms. It resembles a flash drive, but instead of computer files, this device stores nicotine.