Average Florida Prison Sentences Are Getting Longer. Here's Why You Should Care

New research from the Urban Institute, an economic and social policy think tank, shows long prison sentences are part of the reason for that ballooning population of incarcerated individuals, not just rates of incarceration.

The number of people serving 10 or more years in Florida has tripled  since 1996, now constituting 17 percent of the prison population.

The average prison sentence has grown--from four years to 5.4 years--but a larger increase can be found in sentences for violent offenses—from 5.1 to 7.6 years.

Listen below to a discussion with Ryan King, senior fellow with the Urban Institute, about how the length of prison sentences has been missing in efforts to chip away at mass incarceration and what he recommends states like Florida can do about that.

Listen
Listening...
/
Click here to listen to the discussion of the Urban Institute research. 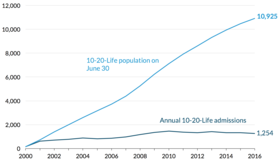 One of the challenges with long prison sentences is that individuals go into prison and don’t leave, “stacking” and bumping up the prison population each year. You can see that illustrated in the graphic below.

One of the Florida policies that led to a large number of inmates with long sentences was called the 10-20-Life Law. This mandatory minimum sentencing scheme primarily dealt with the sentencing of individuals who possessed firearms in the commission of a crime.

The law was reworked in 2016, but thousands of individuals sentenced under the old law still fill prison dorms and cells.

States like Florida have no parole and require most offenders to serve at least 85 percent of their sentences. King suggests reforming that policy to allow inmates to earn time off their sentence through classes and good behavior.

Florida Could Steer Drug Offenders To Diversion, Not Prison

A bill that would steer more Florida drug offenders to diversion programs rather than prisons is moving forward.