Most of the news and research these days about coral reefs is pretty grim — massive losses from bleaching, everywhere from Australia to the Florida Keys. Some parts of Florida and the Caribbean have lost more than half of the living coral off their reefs in the last three decades. 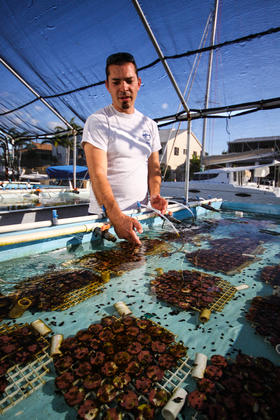 But there is some good news on the coral research front and this week saw a major milestone in those efforts, when Mote Marine Laboratory opened its new $7 million center in the Keys.

"Five years ago, 10 years ago, everyone would throw up their hands because there was no way to bring back a coral head that took 100, 200, 300 years to grow," said Michael Crosby, president and CEO of the Sarasota-based organization.

Mote has had a research outpost in the Keys for almost 25 years. It was the director of the Keys lab, Dave Vaughn, who figured out a way to propagate corals in the lab so they could be grown much more quickly. Those corals are then transplanted to the ocean.

"This micro-fragmentation and re-skinning technology, it is in fact the means by which we can bring back and re-skin that coral head in literally a matter of two years what it would take nature 300 years to grow," Crosby said.

The new International Center for Coral Reef Research & Restoration on Summerland Key means Mote will be able to do more of that work, and share it with scientists from around the Caribbean and the world, Vaughn said.

"We need some good news about our oceans and our corals, and this is it," he said.

A recent study authored by scientists from the National Marine Fisheries Service and the University of Miami says dredging at PortMiami is killing far more coral than the U.S. Army Corp of Engineers predicted.

The dispersant used to clean up the BP oil spill is “very toxic” to coral, according to a study by Mote Marine Laboratory in Sarasota.