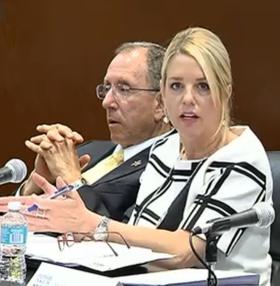 While the state has made new strides in efforts to combat human trafficking, a statewide panel convened by Florida Attorney General Pam Bondi says there are still areas that need some work.

At Thursday’s meeting of the Statewide Council on Human Trafficking in Tampa, Bondi updated the panel about some troubling statistics.

“30 percent of trafficking cases in both Tampa and Miami involved girls with intellectual disabilities,” said Bondi. “While the average age of the victim was 14, the cognitive age equivalent was eight to ten-years-old. These victims primarily describe their traffickers as boyfriends because they don’t know any better.”

More drug traffickers are now switching to human trafficking, and Fort Myers continues to be a hot spot for human trafficking. Other problem areas include the Florida panhandle, where a lot of labor trafficking there is linked to the hotel industry. The 15-member panel also heard good news. For example, Orlando had successfully prosecuted the first case using Florida’s human trafficking statute.

A bill aimed at toughening Florida’s human trafficking laws will become law in a few months, following Governor Rick Scott’s signing. It increases the penalties for soliciting another for prostitution.

Strip clubs, massage studios and hospitals will have to hang signs alerting people about human trafficking under a bill that's going to Gov. Rick Scott.

The Senate unanimously passed the bill (HB 369) Wednesday. It's a weaker version of a bill it approved last week and the House later changed.

The signs provide a telephone number people can call if they or someone they know are being enslaved as prostitutes, farm workers, housekeepers or restaurant, retail or factory workers.

Fifteen people have been arrested in what Attorney General Pam Bondi is calling the largest human trafficking case in state history.

Joined by officials from the Florida Department of Law Enforcement and the Collier County Sheriff’s Office at the capitol Wednesday, Bondi said the sting involved at least six victims. All of the women had been illegally smuggled into the United States from Mexico and Central America.

State Looks To Ramp Up Fight Against Human Trafficking

Targeting what one senator described as a "sick but profitable criminal enterprise,'' lawmakers have started moving to ramp up Florida's response to human trafficking.

One proposal (HB 465/SB 1108) would increase penalties for "soliciting, inducing, enticing or procuring another to commit prostitution." Another (HB 457/SB 698) would dedicate funding from a "Safe and Free Florida" specialty license tag to victim services.