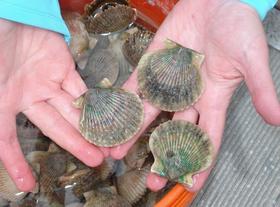 The Gulf County bay scallop season is now open to harvesters, after state wildlife officials postponed the season for about two months.

In July, The Florida Fish and Wildlife Conservation Commission closed the Gulf County bay scallop season, due to an algae bloom in Saint Joseph Bay that directly affected shellfish. But, FWC spokeswoman Amanda Nalley says her agency decided to open the season again Saturday, after regular tests of the water.

“And, in the past two weeks actually, we have had samples that have come back that have tested safe for human consumption,” she said. “And, to do that, we have to have samples that come back seven days apart, across the bay. And, we had that. We were able to meet the [FDA] requirements to be able to reopen the bay.”

Unlike the normal season, this season only lasts for 16 days and will end October 8. It will be open in all state waters, stretching from the Mexico Beach Canal in Bay County to the Westernmost point of St. Vincent Island in Franklin County. For more information, visit the FWC website.

Toxic algal blooms have been happening more often in the rivers off Lake Okeechobee. One of the main causes is phosphorous runoff from wastewater and farmland. But a new filter may make algal blooms caused by wastewater a thing of the past.

Blue-green algae blooms that devastated Florida's coasts last summer contained as many as 28 types of bacteria, some of which can harm humans.

A new report by the American Civil Liberties Union is raising questions about the state’s handling of last summer’s toxic algae blooms in South Florida.

The Indian River Lagoon is repeatedly being choked with oxygen-robbing algae, its surface increasingly dotted with thousands of dead fish, manatees, birds and other creatures.

An international team of researchers headed by a Florida Gulf Coast University professor is trying to understand the most common marine toxin in the world.