Days after Hurricane Irma battered South Florida, Rufus James walked through his Liberty City neighborhood in Miami looking for paid work to chop down trees and clean up yards.

Like many Floridians, James, 57, was going on day four with no electricity. At home, he had three grandchildren to feed. They’re eating “cornflakes and whatever we can come up with. I’m looking for some food,” he said.

Before the storm, James said he worked odd jobs — helping elderly neighbors mow their lawns or move heavy items. Post storm, no one was paying for help yet.

On the surface, Hurricane Irma seemed to spare most of South Florida the brunt of the storm when it comes to structural damage. But days without power and unpaid time off — or no work at all — casts a harsh spotlight on the poverty that existed in Miami-Dade’s most vulnerable communities long before Irma made landfall.

While some grassroots efforts are trying to bring food to poorer communities after the storm, it does not get to everyone who needs it, and some families report they’re going hungry.

“We don’t have no food,” James said. He’s hoping to land a few $10 or $20 neighborhood jobs, so he can afford some groceries from neighborhood stores that are taking cash only.

In some areas, residents who receive food benefit cards under the Supplemental Nutrition Assistance Program (SNAP) can’t use their debit-like cards because without full power the credit card systems aren’t functioning.

It’s forced some families to look for food wherever they can.

When Tameka Ellington, 32, heard police officers driving around her Little Haiti neighborhood announcing that free ice would be handed out at Charles Hadley Park in Liberty City, she quickly headed over.

She only had a quarter tank of gas, but she reasoned the trip would be worth the drive a few blocks west from her home. She hoped to put some lunch meat on ice before it goes bad.

“For us as single mothers we don’t like being unemployed,” she said. “We want to go to work, but we don’t have the financial help to put our younger ones in day care.” 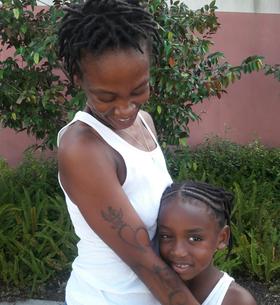 Ellington stood in line with her 5-year-old son. She thought they’d also offer canned goods or bread. After waiting for almost two hours in line, each family was handed one bag of ice, courtesy of the City of Miami. There was no food.

Miami Commissioner Keon Hardemon, who grew up in Liberty City, helped pass out the ice and the next day held a community bar-b-que at the same park.

“Yes, we’re dry here thankfully. We have higher land, but people are still suffering,” he said. “This has always been a place where people are living meal to meal, month to month, just trying to get by.”

Hardemon acknowledged handing out ice doesn’t solve the underlying problem of poverty. He said to do that, there needs to be smart policy across a number  of systemic issues, including low-wages.

A recent Florida International University study found nearly 20 percent of Florida workers earn $10 or less an hour.  The study noted while job numbers appear to have improved, many new jobs are low-wage positions that exacerbate income inequality across the state and in places like Miami-Dade.

“We know certainly these people can’t live on minimum wage. Minimum wage is not the standard. It’s the floor,” said Hardemon. “It’s the safety net for people trying to take advantage of people. We just have to do better for people to live better in our communities.”

For Ellington, a small cash allowance from the federal housing program known as Section 8 helps pay her light bill. She’s been using some of that money to make sure she and her family eats dinner. She also counts on school breakfasts and lunches for her son.

But with Miami-Dade public schools out through the end of the week, she said that much-needed safety net for children is gone.

“If school was open, the kids could eat at school,” Ellington said.

When power is eventually restored in her Little Haiti neighborhood, she said hers might get cut off for nonpayment if she can’t replace the money she used to survive after the hurricane. Most of the groceries she purchased before the hurricane warning have gone bad.

“My house smells like spoiled raw meat,” she said.

Some local grassroots groups and individuals have taken up the call to help families who might need food.

“Because it turns out, if food scarcity is a thing before a hurricane in our communities, it’s still a thing after a hurricane,” said Valencia Gunder, a local activist who also runs Make The Homeless Smile, a non-profit in Miami. 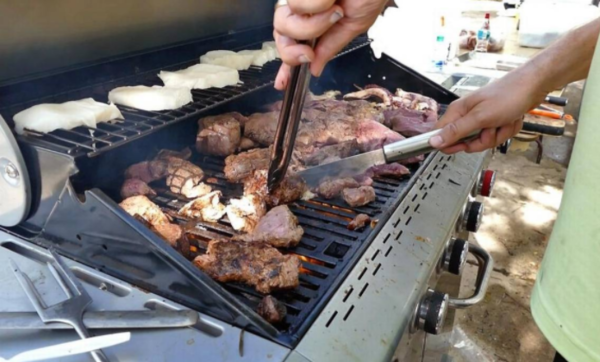 Volunteers from Florida New Majority, a social justice nonprofit, and other organizations have been setting up grills in neighborhoods like Little Haiti, Little Havana and parts of South Miami-Dade. They give out free hot dogs until they run out.

On a recent afternoon they set up on the corner of Northwest 18th Avenue and 67th Street. Samuel Robinson rode by on his bicycle. He placed two hot dogs in the plastic bowls he carried with him.

“You can’t even find no bread nowhere,” he said. “If we have bread and water, we’ll be alright.”

In West Coconut Grove, Elizabeth Virrick Park turned into a fancy cookout for nearby neighbors who had been eating Vienna sausages out of the can.

After Miami commissioner Ken Russell, who represents the neighborhood, heard about a fine-dining restaurant in South Beach that was going to throw out about $50,000 worth of  meats and seafood because of the ongoing power outage from Hurricane Irma, he  helped coordinate getting the food to the park.

The owner of Villa Azur teamed up with neighbors from the nearby Kingsway Apartments on Charles Terrace, also known as “the projects,” to grill the food.

About 400 people showed up to feast on lobster, medallions of filet mignon and Chilean sea bass.

“This is the neediest part of my district. It always gets the short end of the stick. So every chance we get, we’re going to help this community,” Russell told the Miami Herald.

And further north in Opa-locka, Miami Dade school board member Steve Gallon III  set up a simple fold out table to hand out sandwiches and fruit to children.

Still, despite some of these pop-up efforts, in the immediate aftermath of Hurricane Irma, the aid to food-insecure communities is far from consistent.

McKenzie said after paying $1,600 for rent earlier in the month and buying groceries that have since gone bad because of the power outage, she doesn’t know what to do.

“I just feel like we’re not a priority right now and that’s why I’m upset,” said McKenzie. “They think we don’t need to eat? We don’t need to have lights?”

She said even if there is no flooding, Hurricane Irma did impact Miami-Dade’s poorest.

“My kids didn’t have nothing to eat this morning,” said McKenzie. “We just pray our lights come on, but when it do, we’re still in a disaster.  We have no food.”

The Miami Herald contributed to this report.

All of Sarasota's emergency shelters have been closed down after Hurricane Irma except one.

The county's Chief of Emergency Management Ed McCrane says as of Monday afternoon, there were about 30 residents with special needs still staying in one shelter.

Gov Scott: Focus On Getting Power Back And Keeping People Alive

Like clockwork, stories of suffering by the oldest residents in the line of hurricanes, floods, tornadoes and other natural disasters seem to follow. Regulations dictate nursing homes and other facilities must have preparation plans in place, but the realities of how older Americans cope with a storm go beyond any piece of paper. The issue burst to the forefront again Wednesday with news of eight deaths at the Rehabilitation Center at Hollywood Hills in Florida, where workers say Hurricane Irma caused the air conditioning to fail, and they struggled to keep residents cool with fans, cold towels and ice.

Eight patients at a sweltering nursing home died after Hurricane Irma knocked out the air conditioning, raising fears Wednesday about the safety of Florida's 4 million senior citizens amid power outages that could last for days.