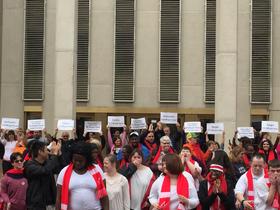 Tuesday in Tallahassee was a day for love and awareness. Governor Rick Scott marked the day as Developmental Disabilities Awareness Day. Advocates took it as their cue to ask for their legislative priorities this Valentines Day.

Those that provide such supervision are direct care workers- a job Bradley performed for his sister.

The Arc of Florida and The Developmental Disabilities Council joined forces Tuesday to plead their cases for increased funding in developmental disability services, transportation providers, and job training programs.

However, Barbara Palmer, Director of the Agency for Persons with Disabilities, says there is still a ways to go. The Senate has proposed a $66 million budget plan, while the House-spending plan includes nothing. She says failing to provide enough funding could hurt families waiting on help getting services through waivers.

“The waiver started back in the 80s, and at that time some of the parents were in their 20s and 30s. They’re now in their 60s and 70s. They need help to take care of their loved ones, especially to keep them in their homes,” Palmer says.

Palmer sympathizes with the plight of the direct care workers as well, and urges the legislature to pass laws that provide caretakers with a livable wage, not just a minimum wage that is non-recurring.

“We’re asking for that to be recurring money. Because every year if it’s non-recurring you have to keep going back in to ask for it,” Palmer says.

Both organizations urged families to continue speaking to their representatives for the remainder of the session.

A bill that would restrict the ability of health insurers and HMOs to retroactively deny claims passed the House Appropriations Committee on Wednesday, scoring a victory for physicians.

Shortly before a mass shooting at a Broward County high school, a Senate committee on Wednesday unanimously approved a bill that could dedicate more funding to Florida schools for mental health services.

Legal wrangling over new trauma centers and which hospitals should be allowed to operate them could come to an end under a proposal moving through the Legislature.

“We have a deal,” Young told members of the Senate Health and Human Services Appropriations Subcommittee.

Two bills in the house would hold high school teachers accountable for sexual offenses against adult students. Current Florida law cannot prosecute a school authority figure who has a relationship with a student who is 18 or older. House Bill 515 makes such relationships second-degree felonies, while House Bill 1391 ensures school districts monitor offenders.  Rep. Amber Mariano (R-Port Richey), a sponsor of the bill, says this issue hits close to home.

Physicians, certified advanced registered nurse midwives and licensed midwives who attend at-home births or deliveries in birthing centers would be required to report to the state “adverse” medical incidents, under a bill the Senate considered Thursday.