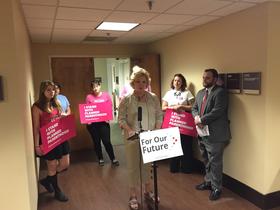 Activists statewide are urging U.S. Senator Marco Rubio reject a controversial healthcare overhaul approved earlier this month by the House.  They showed up Tuesday at the Republican’s offices throughout the state.

“In sum the affordable care act has ensured I’ve had access to healthcare when I needed it the most,” Gentile says.  “No other person should be denied the chance to achieve their goals as I have.” 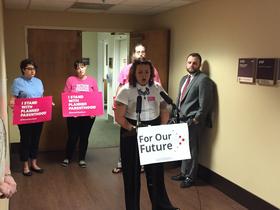 “The AHCA’s pick-and-choose, repeal-and-replace approach undermines the principles and commitments that motivated the initial passage of the ACA,” she goes on.

Gentile worries the House GOP-backed American Healthcare Act will allow insurers to skimp on coverage, or price her out of her current plan.

Patricia Byrd of Panama City argues provisions in the bill will hurt people with pre-existing conditions—like her son.

“As a practical matter, pre-existing conditions would again prevent millions of Americans from obtaining the private sector coverage Obamacare sought to provide,” Byrd says.  “Once again my son would be a part of this travesty.”

Doctors found a non-malignant tumor on the frontal lobe of her son’s brain when he was in college.

Byrd says her family struggled for decades to keep him covered before lawmakers approved the ACA.

But the new measure approved in the House carries waiver provisions that could allow states to opt out of basic benefit and pricing mandates.  The Congressional Budget Office zeroed in on those waivers noting they could lead to high premiums for people with preexisting conditions.

The House voted Thursday to narrowly approve a Republican-drafted measure that would eliminate many of the provisions of the Affordable Care Act — the first step toward keeping one of President Trump's campaign pledges and a victory for GOP lawmakers who have long railed against Obamacare, as the ACA is commonly known. The vote was 217-213.

The measure moves to the Senate, where its fate is far from certain — and where top lawmakers in both parties are already signaling that there is a long legislative process ahead.

Signing up for coverage on the health insurance marketplace should be easier for some people this fall because new federal rules will allow brokers and insurers to handle the entire enrollment process online, from soup to nuts.

The Republican overhaul of the federal health law passed by the House this month would result in slightly lower premiums and slightly fewer uninsured Americans than an earlier proposal. But it would leave as many as one-sixth of Americans living in states where older and sicker people might have to pay much more for their health care or be unable to purchase insurance at all, the Congressional Budget Office said Wednesday.