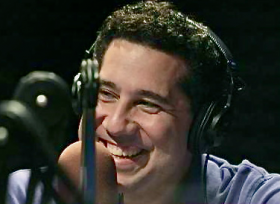 I was introduced to radio my sophomore year of college, after a classmate invited me to audition for a DJ job at the campus' new radio station, WFCF. I showed up, read a couple of cue cards, and got the job. The following semester I changed his major and radio has been a part of my life ever since.

I moved back home to South Florida after graduation and worked as the sports director at WJNO in West Palm Beach living the tough life. You know, spending hours and hours going to sporting events and talking with some of the biggest names in sports in Miami.

I got the chance to head west for a few years, trading in the sunny beaches for life in the Mile-High City. There, I continued my radio career and dipped my toes into television life as a sports host for a local high school football show. But South Florida pulled me back and to the news desk at WIOD. It was an exhilarating and difficult experience during the 2004 hurricane season.

It was on my next adventure, a job at a newsroom in Gainesville, where I found public radio. (I like to brag about the fact that my time at the University of Florida came during the years the basketball team won back-to-back titles and Tim Tebow arrived.) From Gainesville I went to Fort Myers, then once again out west to public radio in Las Vegas.

While in Sin City (which by the way, people in Las Vegas hate when you call it that) I covered hard news, politics, environmental issues and had the chance to interview an interesting assortment of characters including Boyz II Men, Andre Agassi, and MikeTyson.

But Florida brought me back. And I'm grateful to be back in South Florida​​, for the third and final time.

School districts across South Florida are devising plans now for students this fall. Broward County Public Schools has drafted a plan in which students may only be able to attend school two days a week. Palm Beach County Superintendent Donald Fennoy discussed the possibility that in school attendance will be voluntary depending on the discretion of parents.

As districts continue to wrestle with the challenges of social distancing, sanitizing school property and keeping children safe, the only certainty this fall is that it will be a much different school experience than we are used to.

Several Florida students are continuing a legal fight over climate change inaction. They're suing the governor and other state lawmakers for not doing enough about climate change. They claim their future is in jeopardy.

From toothbrushes, to water bottles, to straws, plastics are a part of everyday life. And yet the damage they cause to oceans and wildlife is well established.

Students in South Florida could soon have an app to help them with their mental health. Teacher Samantha Pratt came up with the idea as a way for students to find help dealing with personal or school stressors. The app, called Klickengage, would also let teachers know the mental states of their students before the school day gets underway.

Three South Florida high school students have come up with an invention that could protect people from becoming rape victims. What's that invention? They call it the Smart Straw.

Things are a bit quieter at the state capital, now that the year's legislative session is over. Many bills were left on the table, as always happens, but one that made it is being cheered by numerous environmental groups.

An Incomplete Picture Of Sexual Assault In Florida Schools

There has been a lot of attention on the issue of sexual assault on college campuses in recent years. There was an alleged case of rape on the University of Miami two years ago that ended with the firing of a professor and a lawsuit from an accused student.

Questions Remain In Death Of Patient

The story of Maria Huaman has set off a score of comments online, criticizing everything from Jackson Memorial Hospital to the organ transplant process.

Huaman died on Jan. 13 at West Kendall Baptist Hospital. According to Huaman's family, Maria was denied a transfer to Jackson for a lung transplant. Why she was denied comes from the family because the hospital has not spoken.

Ending Rape on Campus a Matter of Consent

There's a disturbing reality about college life today. Roughly one in four students, predominantly women, will become victims of some form of sexual assault, according to a new survey.

Millions of runners are searching for a new challenge. They want something with more danger and fun than a traditional marathon event.

There used to be a time when athletes would get knocked in the head, fall to the ground, struggle to get back on their feet and wobble around before regaining their bearings.

It used to be called "getting a ding." Athletes were encouraged to just "walk it off."

That still happens in many sports, from the youth levels all the way to the pros. But over the past few years, recreational leagues, schools and athletic associations have gotten more serious about these head injuries.