The University of Miami held a public forum on Tuesday about human trafficking in the United States.

Survivors, researchers and government officials were there. Part of the discussion was about treating human trafficking as a public health issue. The idea is to encourage medical and community involvement to identify possible victims.

HeidiSchaefferis an internal medicine specialist. Throughout her practice, she has treated a lot of victims of sexual and labor exploitation. “Human trafficking is by far the No. 1 epidemic in this country,”Schaeffersays.

On the examination table, doctors can identify possible victims if they present one or some of these characteristics.Schaeffersays for example:

“On sex trafficking, we can see girls or boys that have STDs at a very early age; multiple pregnancies in teenagers; defensive wounds or traumas, especially in the genital area, and a lot of branding and tattoos that usually contain the name of the pimp in a visible location because these boys or girls belong to that pimp and they want everyone else to know that.”

Linda Geller-Schwartz is a state policy advocate with the National Council of Jewish Women. She says

Geller-Schwartzsays legislation about the problem is on the way to Florida’s House and Senate for this coming session. “There’s a new bill coming to ensure that our doctors are trained to recognize human trafficking when they see it. So it will be another preventative measure that’s very important.”Another reason for the forum was to join forces in order to gather better statistical data about human trafficking in Florida and the rest of the United States.

Katherine Chon is director of the Office on Trafficking Persons, Administration for Children and Families within the U.S. Department of Health and Human Services. Chon says that “21,000 cases of human trafficking have been reported through the National Human Trafficking Resource Center.” She also mentions that 5,000 of those cases are from the 2014 fiscal year alone.

“This is a health crisis, this is a public health issue,” says Katariina Rosenblatt, founder of  There is Hope for Me and a survivor of human trafficking and sexual exploitation. Rosenblatt was exposed to having her body sold for money on separate instances between the ages of 13 and 17.

Rosenblatt says she has lost friends from having contracted STDs due to having sex against their will. “If I would have been educated in my school system, that scare would have been prevented, those friends would still be living,” Rosenblatt says. Her foundation has helped rescue more than 300 girls across Florida, especially in  Miami-Dade, Broward and Palm Beach counties.  “I rescue girls out of sex trafficking and provide them with leadership skills so they can help others.”

SandySkelaneyis an adjunct professor at Florida International University who teaches students about sex trafficking.Skelaneysays that within this topic there is a general “creation of faulty stereotypes [of trafficking victims]... so that people can get angry on the issue to be onboard with all of the actions to combat trafficking.” She has also helped rescue female victims in Miami between the ages of 11 and 18 from human trafficking.

She says that having this public forum on human trafficking with a public health approach moves into addressing "the root causes of this issue and how do we transform our community approach to be able to address people that are at risk early on and solving these issues within [the community].” 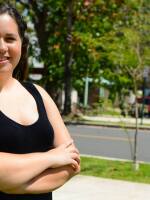