There are no common defining moments or traits that determine when gender identity becomes set for human beings, but there is evidence that the understanding of where individuals fit starts at birth.

“Babies all start out the same way – tiny and goofy,” Fausto-Sterling said. “When you look at a group of babies, you can’t tell what [gender] they are.”

Fausto-Sterling is a Brown University Professor Emerita and fellow of the American Association for the Advancement of Science. An expert in biology and gender development, she’s using a dynamic system approach to change the way people understand gender identity development and breaking down the “nature versus nurture” theory that has existed previously.

“Nature and nurture doesn’t explain complete, complex people,” she said. “This is really about stability and instability and the changes they can create in behavior and identity.”

Her presentation, “From Baby in the Yellow Hat to Gender Identity and Expression,” set a framework for gender identity and understanding how it develops.

“Identity, sexuality and gender are all interrelated,” Fausto-Sterling said. “But there is individual variability – it’s different in individuals, but also different in the the life cycle.”

And those identities, while they can be classified by researchers, are not interchangeable.

“We need to understand how identity emerges and develops,” she said. “There is equifinality here, the concept that ‘all roads lead to Rome,’ but not everyone has the same path.”

At the heart of the concept is stability vs. instability, an idea called Soft Assembly.

“Soft Assembly says that there is a semi-stable set of physiological set of systems at work that determine our state,” Fausto-Serling said. “It distinguishes process, which is always happening, from traits, which are unchanging.”

Fausto-Sterling said that our stability can change in both subtle and dramatic ways and each has its own effect.

“If you are in an accident and physically changed, for example, your stability can become chaos,” she said. “But once the chaos subsides, people discover a new stability.”

Babies begin absorbing the world around them from almost the moment they are born and these early years -- up until about age seven --  is when their gender identity develops.

Babies learn patterns and behavior affect through this repetition. If the child smiles at a parent, the parent smiles back; if they cry for attention, they will get attention, she said. Children also pick up their gender identity through these types of interactions and the stimuli around them.

“This all happens through around age seven when children develop their gender identities,” Fausto-Sterling said. “Babies start as passive, become assertive, make the connections to symbols of identity of the world, understand how these connect to their genitalia and then come to a permanence.”

In Fausto-Sterling’s concept, people can start out at similar or different starting points, but neither of these define their identity outcome; different paths can lead to the same end point; and as the landscape changes, so can identity.

She ended her talk with questions from the audience, and the conference concluded another successful year.

Earlier in the day, about 100 people attended break-out sessions in three rooms in the conference center.

Topics of student presentations ranged from gender depiction in popular music to poetry inspired by the Salem witch trials.

“These were the strongest submissions of papers and presentations we have seen in 15 years,” said Katharine Romack, coordinator of the UWF Women’s and Gender Studies Program.

Romack, who served as faculty sponsor for the event, said she was pleased with the results.

“Our main goals were to spread visibility about the Women’s Studies program and to give students a venue to present their papers and other work in a professional environment,” Romack said.

Snyder is an assistant professor in the UWF department of criminology and criminal justice. She delivered a lecture called “Victimization, Risk Factor and Prevention: Exploring College Student Victimization within Specific Populations.”

The late Mary F. Rogers taught courses at UWF in feminist theory, social change and reform, social justice and inequality and qualitative research. The award, given in her name each year, recognizes those who have done outstanding work in the field of women’s studies. 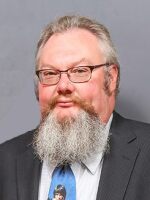