Cameron Stewart is a big man. He played high school sports. He served as in the Marine medic corps in Afghanistan and Iraq. But after he was left with crippling back pain, he became a chiropractor — and his greatest professional talent may be empathy.

Cameron Stewart was born in California, but when he was young, his parents moved the family to eastern Washington.

“When I was 13, the family moved up to Spokane and bought a farm. I went from a beach bum to a farm hand. My parents worked in the medical field, and the farm chores were left to my sister and me," he said. "Every day, we’d get up early and take care of the farm, go to school, come home and do more farm chores, and wake up the next day and do it all over again.”

Cameron was a star athlete in high school. He’s 6-foot-5 and weighs more than 300 pounds. He played football, although his best sport was track and field, throwing the discus and hammer. After two years of junior college, the events of 9/11, to join the Marines and become a medical corp man. But the Marines were at war, and they wanted the big guy out leading troops.

So Cameron trained as a Navy corpsman and was assigned to a Marine brigade. He married and moved to Hawaii with the Marines. Then his unit went to Afghanistan.

“I married my high school sweetheart. We were doing okay, joined up with the third marines, deployed to Afghanistan. While I was there, my wife filed divorce papers.”

Camaron returned to Hawaii, but his unit deployed again — this time to Iraq. Cameron came home once again from war, met the woman to whom he’s now married, finished his enlistment, and went back to college. He slowly began to realize that he was injured, and suffering increasing back pain.

“Nothing was violently done. It riding around in Humvees that were not meant for someone my size, wearing an 80-pound flak jacket with bullet-proof plates on it, and carrying around 300 pounds of equipment on my back. That wear and tear led to lower back injuries.”

“I was taking eight OxyContin a day just to function," he said. "It took me two hours on a concrete floor, screaming into a pillow, to relax to the point where I could get a few hours of sleep. My wife had to help me get dressed in the morning, because I couldn’t bend over and touch my toes or ties my own shoes.”

Coincidentally, Cameron Stewart had decided to become a chiropractor, for several reasons.

“I knew that I wanted to be my own boss, and being a chiropractor was one of those ways of looking at that," he said. "I’ve always believed in chiropractic, from having a football injury helped me participate and get back into track and field.”

Cameron finished college at Washington State, then moved to Florida to go to chiropractic school near Daytona Beach. The move to Florida accomplished a number of goals for Cameron and his wife.

“We’re closer to her family," he said. "My family is very spread out, but she has a very strong tie with her family in Baltimore.”

Cameron has the training and the physical strength to excel at his profession, but his personal experience may be his most singular asset as a healer.

“It does give me a unique perspective on people who have very intense pain," he said. "It allows me to really sympathize with them on what it means to suffer through pain, to not be able to live and function the way they want to. I’m able to be active and walk, and do things I thought I’d never do.

"Through all that pain that I’ve endured, if I can help people through my profession to meet their goals, then I know I’m doing what I can to help.” 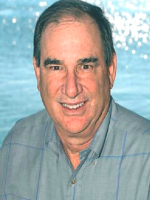